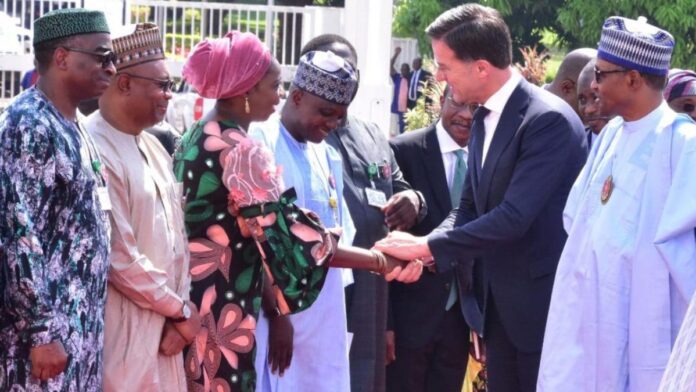 The News Agency of Nigeria (NAN) reports that Rutte was received at the forecourt of the villa, by the President.

The two leaders immediately went into a closed-door meeting at the President’s mini-conference office.

A number of treaties were expected to be signed at the end of bilateral consultations between the delegations of Nigeria and the Netherlands.

Nigeria’s Ambassador to the Netherlands, Oji Ngofa, had told NAN that the visit would provide an opportunity to attract more Dutch investments to the country, particularly in the manufacturing and agriculture sectors.

He said that the Rutte would be accompanied by a trade delegation made up of Chief Executive Officers of Dutch companies already operating in Nigeria as well as prospective investors.

He said “This visit affords us the opportunity to assess the state of our bilateral relations which I believe is very cordial and to also look at all the areas that we have agreed to partner for mutual benefits.

“Having this visit for me at this level is very gratifying. It is the best thing to happen to us as a country.

“The Dutch have a very powerful and competitive economy; they are the second-largest producer of food and agricultural products in the world.

“They are advanced in innovation and technology, especially in the area of agriculture which we can leverage on, and with our involvement with them, in investment and trade, we have a lot we can benefit from them.”