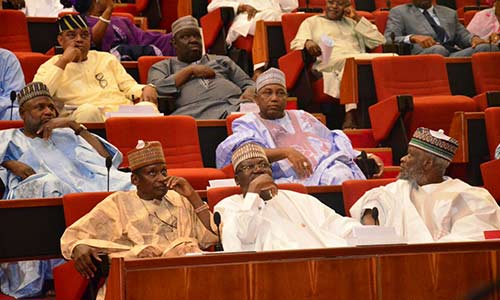 The Senate has reintroduced the Gender Equality Bill.

The ‘Gender and Equal Opportunity Bill, 2019’ is one of the 12 read for the first time on Tuesday. It is sponsored by Biodun Olujimi (PDP, Ekiti).

Ms Olujimi, the then Minority Leader, brought the bill in the eight Senate.

The legislation sought to guarantee the rights of women to equal opportunities in employment; equal rights to inheritance for both male and female children; equal rights for women in marriage and divorce, and equal access to education, property/land ownership and inheritance. It also seeks to protect the rights of widows; guarantee appropriate measures against gender discrimination in political and public life and ensure the prohibition of violence towards women.

The proposed law also seeks equal opportunity, development advancement for all Nigerian citizens irrespective of gender as well as promote girls’ access to education, freedom for women to participate in any economic activity and their right to freedom from violence.

The bill was first rejected in March 2016 when some male lawmakers argued that the Nigerian Constitution was clear on the rights of citizens, including women.

“It (the bill) has been re-engineered to suit everyone,” Mrs Olujimi said on Thursday, assuring her colleagues when the bill came up for consideration.

Mrs Olujimi said she reworked the bill and has thus represented it to the Senate.

She had said the bill sought to eliminate all forms of discrimination against women and would guarantee equal opportunity, development advancement for all Nigerian citizens irrespective of gender.

This time, no senator spoke against the bill. It was referred to the committee on Judiciary, Human Rights and Legal Matters headed by David Umaru (APC-Niger).

With the reintroduction of the bill, the lawmakers will debate the provisions of the bill on another legislative day.