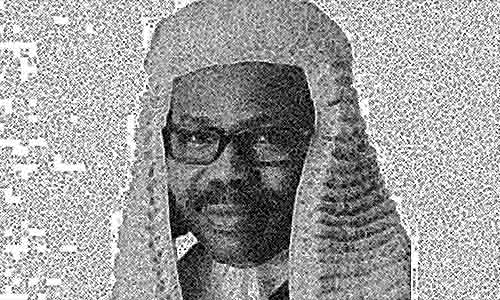 Few days ago, I read about Mr. Governor’s visit to the Inspector-General of Police in furtherance of his concern, or as a demonstration of his concern over the death of Bolanle Raheem and the plight of her family. This came after his statement condemning the criminal act and commiseration with the family and associates of the deceased. Honestly speaking, I am at a loss as to the need for the said visit by the Governor, particularly as per his request for areas of collaboration with the police in taming the rampant extra-judicial killings by policemen in Lagos State.

In my last column on the above subject, I had reminded us of the need to ensure that the postmortem goes beyond the specific incident of Bolanle Raheem into the realm of taming the general trend of police brutality in all ramifications. I said this because of the bandwagon direction by all the commentators on the issue. As in the nature of a rhythm, virtually every commentator appears to be chorusing the condemnation of the killing and the demand for justice. This song is all-pervasive, initiated by my constituency and that of the deceased, the Nigerian Bar Association (NBA), echoed by the Governor of Lagos State, embraced by the President on behalf of the Federal Government of Nigeria, endorsed by the police authorities, the embattled organization and practically all interested pressure groups and individuals on the death of the deceased. Thus the only message pouring out from all these quarters is to ensure proper investigation of the killing of the deceased by the policeman in question and the speedy prosecution and adjudication of the case.

The net effect of all that is that the police and the relevant authorities must ensure justice for the deceased, her family and the Nigerian society through effective, efficient and timely prosecution of the alleged offender. All of the commentators seem not to appreciate the need to go beyond justice for the victim into unveiling the trigger of the event and such other propellants of other similar dastardly acts. This, I believe, ought to be the area of focus in addressing the present incident and taming the potentially identical events. After all, it is often a Yoruba aphorism that “gbogbo wa o le sun, ki a kori si ibi kana,” metaphorically meaning that we cannot all be reasoning in the same direction.

Although the Lagos State branch of the Nigerian Bar Association, in addition to the condemnation statement, demanded payment of the sum of N5 billion to the family of the deceased, I seem not to get from whom? The Federal or Lagos State government? The Nigeria Police Force or the alleged offender? What I, however, found missing, which seems to have been corrected subsequently by the national body is that such demands cannot be verbal but must be made a subject of judicial process. As at the time of writing the draft of this edition of this column, this has not been done, which made me to be uncomfortable. Subsequently seeing the item as a term of reference in the subsequent release by the national body of the association gladdens my heart. Also impressive from the press statement by the NBA is that it now included the previous victim of similar extra-judicial killing by the same division of the police, Gafaru Buraimoh. This is commendable but, however, must be rooted in tort than human right.

The good news is that both the civil action and the criminal action can run simultaneously. The time is ripe to start holding our institutions responsible and liable for misdeeds, particularly that of their agents. The Nigerian Police Force entrusted the alleged offender with the gun, the instrument through which the victim was killed and must, therefore, be made to account for the killing. This will further entrench the principle of victimology in our jurisprudence. By way of matters arising, I suggest that the NBA, going forward, must now institutionalize this mechanism across the nation in all her branches. We must, as professionals, start prosecuting such matters on behalf of innocent citizens and victims made to bear the brunt of such criminal indiscretions. Now, on the issue of the visit of Mr. Governor, which I alluded to above, I do not consider such visit a necessary one. Again, as espoused in a Yoruba proverb, “ohun ti a n wa lo si Sokoto, o wa ni apo sokoto” which literally means what we are seeking by travelling to Sokoto is already in our trousers pockets.

If it is the genuine desire of the state to curb the ugly trend, all that is immediately required, without a visit to the man who could not have known the solution, otherwise he would have put them in place in the first instance, is to institute a tribunal of inquiry covering the death and such other germane incidental matters. From the sittings and the eventual report of the panel, everything that needs to be known and done will be unveiled.

Again, with all sense of humility, in my last column, I had itemized a few areas of intervention, which the governor could have plucked from in forestalling future occurrence of such events. This he might need to read but beyond that there are numerous other things that must happen to prevent future occurrence of this nature. Mr. Governor, by way of recap, you need to help institute a process of routine mental health check for the policemen serving in the state. As soon as they arrive by posting, proper mental health check should be done, particularly for those to bear arms. This should be repeated, if possible, every three years, subject to expert advice, for those still serving in the state. This is one way of taming the evolving pattern. Further to the above, Mr. Governor, you need to assist the police force in acquiring substance testing equipment, which would be used from time to time in routine sampling of policemen on duty, particularly those bearing arms.

Through that those involved in substance abuse can be fished out by the men of the X-Squad department of the police, through random tests of the men on the streets. In the same vein, the drunk ones can also be identified and weeded out. The recruitment process also needs to be overhauled in ensuring that, beyond the fitness and academic qualification, the pedigree and character, less emphasis on federal character and quota system, must be crucially considered. In addition to the foregoing, there might be need to introduce the National Drug Law Enforcement Agency (NDLEA) test as a pre-qualification requirement for recruitment and promotion or elevation of the men. The latter is not really to sanction the men but to ensure rehabilitation, where necessary. I am aware that the NDLEA has this capacity that can be taken advantage of.

I know this ordinarily is beyond the competence of Mr. Governor but my solicitation is for him to table this by way of a memorandum at the Council of States. This is even if a mere correspondence from him cannot achieve the same objective, as that carries more weight in our clan than that of an ordinary citizen. Mr. Governor can further help in the capacity development of the policemen assigned to the state, particularly in terms of weapons handling. In addition, upgrading the accommodation of these policemen is also important as the frustration it breeds and the animalistic tendencies it brought on them will be reduced. This is crucial. If just the above is what Mr. Governor can do, I am of the strong view that this will assist the redemption of the deplorable situation. Back to the other salient issues arising from the incident, particularly the story told by the victim’s husband, I believe the Lagos State Government needs to improve her heath care services. It seems that gone are the days when vehicular ambulances dotted the nooks and crannies of the state.

I would want to believe that if an ambulance had been available at the Ajah junction, the area/vicinity that houses millions of Lagosians, the life of the victim would have been probably saved. Wading through the traffic with the husband’s car is like a camel struggling to pass through the eye of a needle. That delay must have contributed to the eventual demise of the victim.

Had there been ambulance service there, not only would first aid have been rendered, the ambulance would have speedily taken the victim to a health facility with competence to handle such a case. A situation where, after struggling through traffic to visit two different hospitals without competence to handle the case, would not have arisen. This further raises the crucial need to have tertiary health facilities in critical areas of the State. Now addressing the issues of the hospitals that the victim’s husband took her initially, that is Budo Hospital and Doren Hospital.

The account given by the husband of the deceased was that Budo Hospital ‘rejected the deceased’ whilst still gasping for breath and referred them to another hospital. At Doren Hospital, some sort of palliatives was given but with further reference to another hospital, Grandville Hospital in Victoria Garden city. As remarked above, it was in the midst of all these references that the victim gave up the ghost. In the circumstances painted above, it was not as if the hospitals deliberately refused to treat the patient. The references were made due to incapacity. From the ultimate account, a cardiothoracic surgeon was required to save her life and none was available in those hospitals.

According to Prof Peter Adeoye of University of Ilorin Teaching Hospital, only 52 out of the total 75 of cardiothoracic surgeons in the country actually practise in a population of over two hundred and forty million. The implication of this is that it is either we have not trained enough of cardiothoracic surgeons, or they have eloped (“japa” as in colloquial language) due to the conditions of service. The situation is not dissimilar to that of the psychiatrists in the country. This means that the government of Nigeria needs to attract these specialists and doctors back.

We cannot afford to be grandstanding while the privileged led by the President engages in medical tourism. Something radical needs to happen to draw them home if at all they exist elsewhere. The offshoot to this is the need for the state government to ensure spatial distribution of these specialists across the State in a functional health facility. It is one thing to even have specialists, it is another thing to have the equipment to function. If information at my disposal is something to go by, such equipment is not readily available in our public facilities.

This again calls for the special attention of Mr. Governor. On the part of the citizens, there is the need to critically engage the authorities on these needless deaths. These particular deaths should resurrect the ‘soro soke, on your mic’ crusade that has been dying in us. If that alone, I am very happy, as John Stuart Mills put it, all it takes for a nation to decay, is for the good people there to keep quiet’ which in Yoruba proverb is rendered thus: ai le soro ni ipile ori buruku which can be literally interpreted to mean failure to speak out is the beginning of victimhood.

With the foregoing, I believe we have enough to chew in curbing the criminality going on in the State and by extension, the country.