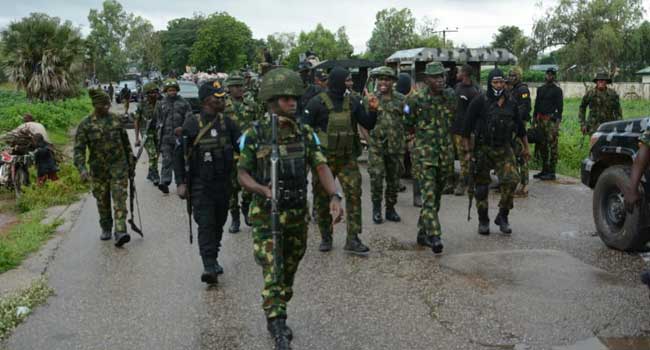 The Defence Headquarters says its troops eliminated more than 50 terrorists in various operations in North East and North West theatres of operation in three weeks.

The Director, Defence Media Operations, Maj.-Gen. Musa Danmadami, made this known while briefing newsmen on the operations of the military across the country on Thursday in Abuja.

Danmadami said the troop of Operation Hadin Kai (OPHK) had between Dec. 30 and Jan. 12, eliminated no fewer than 25 Boko Haram and Islamic State of West Africa Province (ISWAP) terrorists in the North East.

He said the troops also apprehended 18 terrorists and 21 logistics suppliers, two foreign informants and five kidnappers across the theatre during the period.

Danmadami said the troops also rescued 47 abducted civilians while a total of 377 Boko Haram/ISWAP terrorists and members of their families, comprising 52 adult males, 126 adult females and 199 children surrendered to troops.

He said all recovered items, apprehended criminals and rescued civilians were handed over to the appropriate authority for further action.

“The captured terrorists and those surrendered with members of their families are being profiled for further action.

“Other items include, textiles materials, medical supplies, 21 motorcycles, 16 bicycles, two grinding machines, one tanker loaded with PMS, 30 rustle cattle, the sum of N938, 580.00 and other sundry items,” he said.

Danmadami said the series of air interdiction operations at terrorists’ hideouts, enclaves and camps also eliminated scores of the terrorists and destroyed their enclaves in Borno and Lake Chad area.

He added that the battle damage assessment revealed that several terrorists were neutralised with their structures destroyed in the strikes.