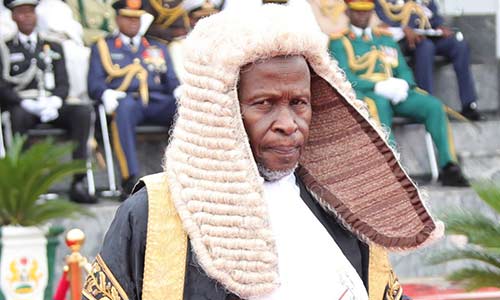 The Chief Justice of Nigeria, Justice Tanko Mohammad, has denied allegations raised against him by Supreme Court Justices.

The denial was contained in a statement by his Senior Special Assistant (Media), Ahuraka Isah, titled, ‘Re: State Of Affairs In The Supreme Court And Demand By Justices Of The Supreme Court’.

In an unprecedented petition, justices of the apex court had jointly accused the Chief Justice of Nigeria of corruption, maladministration and incompetence.

But the CJN said the apex court has been living up to its constitutional responsibility.

“When a budget is made, it contains two sides, that’s the recurrent and the capital, yet all the two are broken down into items. The Federal Government releases the budget based on the budget components. And it’s an offence to spend the money meant for one item for another,” the CJN said while reacting to the allegation of financial misappropriation of funds.

The CJN, who described responding to the petitions of the Supreme Court justices as “dancing naked at the market square”, lamented the effect of Nigeria’s economic situation on the apex court.

He said, “The Supreme Court definitely does not exist outside its environment, it is also affected by the economic and socio-political climate prevailing in the country. Besides that, the Apex Court has to a larger extent, been living to its constitutional responsibility.

“When a budget is made, it contains two sides, that’s the recurrent and the capital, yet all the two are broken down into items. The Federal Government releases the budget based on the budget components. And it’s an offence to spend the money meant for one item for another.

“Take, for instance, the Supreme Court budgeted this year to re-roof and rehabilitate its complex built over 30 years ago and that is being done. The work on the extension of the complex is near completion, the esthetic lawns and cleanness of the perimeters are being well kept, and security and water supply are adequately provided for his brother Justices in their offices and residences. During the period of pandemic, a profound and extra-care was maintained to avoid causalities among them as well as the staff generally. It would have amounted to an act of irresponsibility to divert money meant for the above for otherwise.”

He also debunked an allegation that nothing was done to uplift the court, saying that the death of some justices affected the budget of the court.

Mohammad said, “Besides, two Supreme Court Justices died within the period under consideration. Both the four retirees and the two departed cost the court some funds in the forms of gratuities and allowances.

“Two weeks ago, eight Supreme Court Justices were nominated for a workshop in London as the court cannot take all of them there at once otherwise the job would suffer. They would be going in batches.”

In a leaked petition, 14 justices of the apex court accused the CJN of abandoning his responsibilities and diverting funds meant for the running of the Supreme Court.

Among the issues raised by the justices are accommodation, vehicles, electricity tariff, supply of diesel, internet services to justices’ residences, training for justices and epileptic electricity supply to the court.

They accused the CJN of receiving their demands without acting “after several persistent requests” to hold a meeting which was finally held on March 31, where a welfare committee was set up.

“Your lordship received and ignored these demands since 24th March 2022.

“In the past justices were nominated to attend two to three foreign workshops and training per annum with an accompanying person for reasons of age,” the petition stated.

“Since your lordship’s assumption of office, justices only attended two workshops in Dubai and Zanzibar. They were not accorded the privilege of travelling with accompanying persons as was the practice.

“Your lordship totally ignored this demand and yet travelled with your spouse, children and personal staff.

“We demand to know what has become of our training funds, have they been diverted, or is it a plain denial?

“Your lordship may also remember that the national assembly has increased the budgetary allocation of the Judiciary. We find it strange that in spite of the upward review of our budgetary allocation, the Court cannot cater for our legitimate entitlements. This is unacceptable!”

They also lamented that the Supreme Court clinic “has become a mere consulting clinic”.

“Drugs are not available to treat minor ailments. There is a general lack of concern for justices who require immediate or emergency medical intervention,” part of the petition read.

While complaining that they lacked electricity to work at him, the justices recalled that the CJN had in an internal memo stated that “electricity would be supplied to the court between the hours of 8am and 4pm daily, for lack of diesel”.

Part of the petition read, “The committee also requested for the restoration of our monthly Internet allowance, because we require uninterrupted Internet service in order to have access to materials online to write our judgments.

“With regard to justice’s vehicles, several are due for replacement, while the new Justices have not received their full complement of vehicles to date. Moreover, some of the vehicles supplied to the Justices are either refurbished or substandard.

“Your lordship with all due respect, this is the peak of the degeneration of the court; it is the height of decadence, and clear evidence of the absence of probity and moral rectitude.

“Your lordship, this act alone portends imminent danger to the survival of this court and the Judiciary as an institution, which is gradually drifting to extinction.

“It is either you quickly and swiftly take responsibility and address these burning issues or we will be compelled to further steps immediately. May this day never come.”