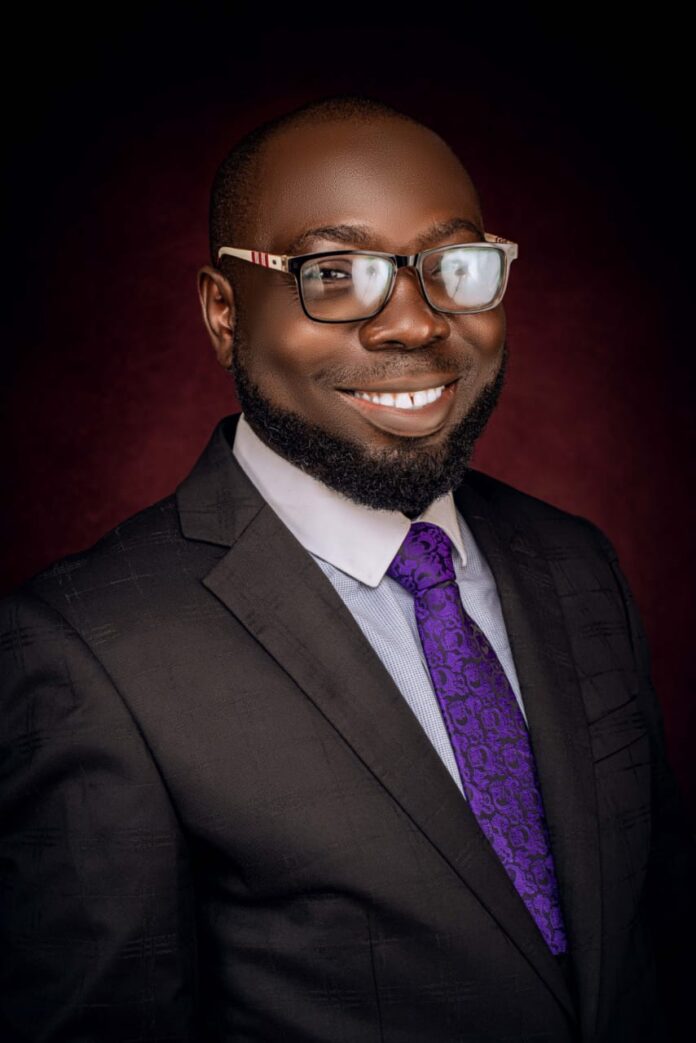 Courtesy: Moruff O. Balogun Esq.
Summary of facts:
At the trial court, the appellant filed an action against the respondents and claimed:
A declaration that the purported sale of the property at No. 38 Elechi Street, Mile 3 Diobu, Port Harcourt to the 2nd respondent (Mrs. Grace Anum) after the executed sales agreement between the appellant and the 1st respondent registered as No. 50 at page 50 in volume 140 in the Lands Registry, Port Harcourt is irregular, null and void.
An order of specific performance by the 1st respondent of clause 2(v) of the sales agreement, the appellant having paid the balance of the purchase price.
Alternatively, the sum of N1 million as special and general damages.

After service of the writ of summons, the respondents filed their separate statements of defence. The 2nd respondent also counter-claimed as follows:
A declaration that the 2nd respondent is the lawful owner and as such entitled to the statutory right of occupancy in and over the parcel of land with building situate at No. 38 Elechi Street, Mile 3 Diobu, Port Harcourt.
N200,000 as general damages for trespass committed on the property before and during the pendency of the suit.
Perpetual injunction restraining the appellant from tampering with or otherwise disturbing the 2nd respondent’s peaceable ownership and possession of the property.

The parties presented oral and documentary evidence at trial. The evidence showed that the appellant was also a tenant in the property at material times. During cross examination of the appellant, he did not deny the newspaper publications made by the
1st respondent or controvert the transactions and correspondence between the respondents as asserted by them. Instead, he repeatedly answered “I don’t know” and “I am not aware” to questions about most of them. He also answered that he was not aware the property was renovated by the tenants as an abandoned property. DW2 stated his name and job title as the Chief Librarian of the publishers of the newspapers pleaded by the 2nd respondent. He presented the bound volumes of the newspapers in court. On the order made suo motu by the trial court, certified copies of the newspapers were made and tendered as evidence. But the trial court rejected both documents as exhibits “AG” and “AH” on ground that the copies made did not bear the official title of DW2 who was still then in the witness box with the original copies.

The following issues were raised and determined by the Supreme Court:

Per KEKERE-EKUN, J.S.C. at pages 519-520, paras. D-B:
“Learned counsel for the appellant argued that the 2nd respondent failed to conduct the necessary search at the Land Registry in Port Harcourt to determine if there was any existing interest in the property and was therefore not entitled to rely on the equitable defence of bona fide purchaser for value without notice. I am of the considered view that the facts and circumstances of this case rendered such a search unnecessary. The property in dispute was an abandoned property. By her pleadings and unchallenged evidence before the trial court, the 2nd respondent led evidence to show how, in response to the publication of the 1st respondent, as a sitting tenant in the property, she repainted and renovated it and thereafter registered it, according to the
1st respondent’s directives as an abandoned property.

The registration was duly published in the Nigerian Tide of 20th December 1985. In
that publication anyone claiming ownership of any of the properties registered as abandoned properties’ was advised to produce evidence to substantiate his claim within 7 days of the said publication. No claim was submitted in respect of the property in dispute.

Thereafter, the 2nd respondent purchased an application form and subsequently purchased the property. It is interesting to note that despite his contention that the property had been sold to him prior to the publication by the 1st respondent, he was unable to show that he took any steps whatsoever to lay claim to the property or to renovate it when renovation was called for.

Having followed and complied with all the conditions laid down by the 1st respondent
and there being no reaction from anyone to the publication of the registration, there was no basis for the 2nd respondent to engage in another voyage of discovery. The lower court was quite right to have held that the 2nd respondent was a bona fide purchaser for value without notice and had acquired a good title to the property.”

On ways of proving title to land-
Title to land can be proved by either of the five ways:
by evidence of traditional history of title
by grant or production of title document
by acts of ownership
by acts of possession long enough to warrant the inference that the person exercising such acts are the owners.
by act of possession of adjoining or adjacent land to the land in dispute.
In this case, both the appellant and the 2nd respondent traced their title to grant by the 1st respondent. The 1st respondent in its evidence admitted that it authored the publications in exhibits AG and AH.

On meaning of “bona fide”-
The word “bona fide” is a Latin word. It means “in good faith, honeşty, without fraud, collusion or participation in wrong doing”.

On nature of title acquired by bona fide purchaser of land for value without notice-
A purchaser for valuable consideration who obtains a legal estate at the time of his purchase without notice of a prior equitable right is entitled to priority in equity as well as in law. In such a case, equity follows the law; the purchaser’s conscience is in no way affected by the equitable right. Where there is equal equity, the law prevails. In this case, the trial court erred in not finding that the sale to the 2nd respondent was an impediment to granting an order of specific performance. In other words, the appellant’s claim for specific performance was not made out.

On who has better title where multiple interests exist in land –
Where there are multiple interests in land, the person with a legal interest is in the eyes of the law, the person having a better claim to the land. In this case, the 2nd respondent is an innocent purchaser for value without notice of the appellant’s equitable interest over the same property. The 2nd respondent’s interest therefore supercedes that of the appellant.

On effect of evasive response to question asked during cross-examination –
A litany of “I do not know” by a party or a witness does not constitute any positive or sufficient denial of the other party’s averments and evidence. In this case, the appellant’s responses of “I do not know” did not constitute any positive or sufficient denial of the respondents’ averments and evidence that the property was advertised for sale to the whole world after its registration and publication as an abandoned property. Both the fact of non-ownership of the property, it consequent renovation by residents and the subsequent publications in the newspaper announcing that it was free for sale
to any interested buyer were facts pleaded and proved and indeed admitted in evidence by the weak evasive responses of the appellant.

On what determines admissibility of evidence –
Generally, admissibility is based on relevance. Put differently, relevance determines admissibility. Once evidence has probative value and is legally admissible, it is considered to be relevant and therefore admissible because relevance determines
admissibility. The moment it is determined that evidence is relevant for the proper determination of any fact in issue, the court is bound to admit it in evidence if it is legally admissible. Relevance is the key to admissibility.
In this case, exhibits AG and AH are newspaper publications properly pleaded
and tendered in evidence through their custodian, the Chief Librarian of the publishers. The original copies of the documents were admissible, they were relevant, and they came from proper custody. In the circumstance, the trial court’s rejection of exhibits AG and AH was perverse and resulted in grave miscarriage of justice to the 2nd respondent.

On proof of contents of public document-
A public document can be proved by the production of the original copy of the document itself, and same admitted in evidence without any certification. In
other words, it is only in the absence of the original documents that certified true copies are admissible as secondary copies of public documents. In this case, the original copies of the bound volumes of the newspapers were presented in court and sought to be tendered in evidence as exhibits. In the circumstance, the trial court who heard the witness testify and saw him tender the original bound volumes of the newspapers containing exhibits AG and AH, erred when it later turned around to reject the same documents. The rejection of the exhibits was perverse and led to a grave miscarriage of
justice to the 2nd respondent. [Kassim v State (2018) 4 NWLR (Pt. 1608) 20 referred to.] paras.C-D)

Per PETER-ODILI, J.S.C. at page 514, paras. D-F:
“The court had no business looking for official title and name of the certifying officer on the documents. These could be added because the certifying officer was still in the witness box (as DW2) and his job title was already in evidence before the court. At any rate, he needed not add those to make that document admissible since the learned Judge and counsel on the other side had already seen the bound copy in its original form in court and it came from proper custody! It was a proper case to admit the original and thereafter substitute with a photocopy.
Thankfully, the court below intervened to halt an obvious miscarriage of justice through the wind pipe of naked technical justice.”

On when photocopy of document is admissible in evidence-
Where a witness is shown a photocopy of a document and he admits that he authored the original, the photocopy can be tendered and admitted in evidence.
Per PETER-ODILI, J.S.C. at page 516, paras. D-G:
“As in the Giovanni case above, the DW2 admitted that he kept the bound volumes in original form. He brought them to court. He admitted he signed the photocopy made
pursuant to the suo motu order of the learned trial Judge. It therefore needed no certificate to be admitted. Even if certification was necessary which is not so, and in view of all that transpired in court that morning, why would a judge who desired to do substantial justice not ask the witness whose job title and official name were already in his record to simply add these to the certification as did the Court of Appeal in Umogbai v Aiyemhoba (2002) FWLR (Pt.132) 192 @ 198 C; (2002) 8 NWLR (Pt. 770) 687.
See also Aribisala v Ogunyemi (2001) FWLR (Pt.31) 2867 2875; (2005) 6 NWLR (Pt.921)
212 where the Court of Appeal posited that the mistake of the official, DW2 in this case who certified the document should not be visited on the 2nd respondent. The court below was clearly right to put down the necessity for substantial justice.”

On need for leave to raise fresh issue on appeal –
Where a party seeks to raise on appeal a fresh issue not raised at the court below, he is required to seek and obtain leave of the appellate court to do so. This affords the court hearing the application the opportunity to determine whether the new or fresh issue is likely to prejudice any of the other parties by setting up an entirely new case different from the issues as joined and fought on the pleadings at the trial court. In this case, the pleadings, evidence and exhibits of newspaper publications show unequivocally that the 2nd respondent relied upon the equitable defence of a bona fide purchaser for value. But the point was not specifically addressed by counsel or decided upon by the trial court.