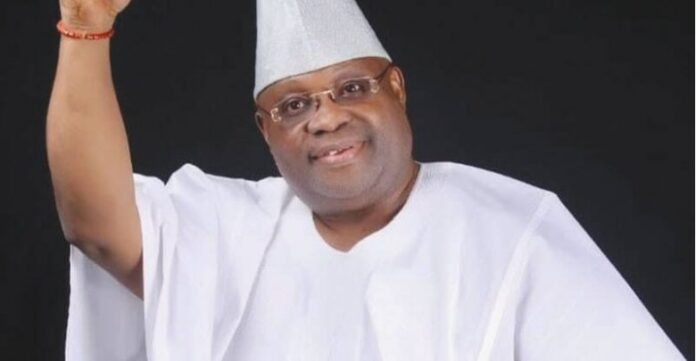 The Osun State Governor-elect, Senator Ademola Adeleke has reiterated his commitment to making Osun State a reference point of development for other States in Nigeria.

Adeleke made this known on Tuesday at an Osun Peoples Democratic Party (PDP) stakeholders meeting in Osogbo.

At the meeting, the governor-elect described his victory at the poll as divine and beyond human permutations.

While ascribing the victory of the party as divinely ordained by God for the rescuing of the State from impoverishment, Adeleke also pledged not to renege on his electoral promises.

In his words, “I assure the people of the State of my pledge not to renege on my electoral promises. My victory was ordained by God almighty to rescue the state from the wicked enslavement and deliberate impoverishment of helpless citizens.”

While commending party leaders, members and supporters for their support, Adeleke appreciated the members of the Party’s caretaker transition committee under the Chairmanship of Akindele Adekunle, as well as the gubernatorial Campaign Organisation under Sunday Bisi.

Speaking at the meeting, the Osun State PDP Caretaker Chairman, Akindele Adekunle expressed appreciation to the electorate in Osun State for their unwavering determination to vote in Ademola Adeleke at this time.

Akindele noted that the party leadership was resolved to set up a post election review committee.

He added that this is in line with best practices in electoral politics.

“The committee became necessary to enable the party to address all grey areas and develop strategies for a better outing in the forthcoming general election.

“The committee is to be chaired by a legal luminary, Oladosu Babatunde, Esq, while Hashim Abioye, Esq, will serve as secretary of the committee,” he said.