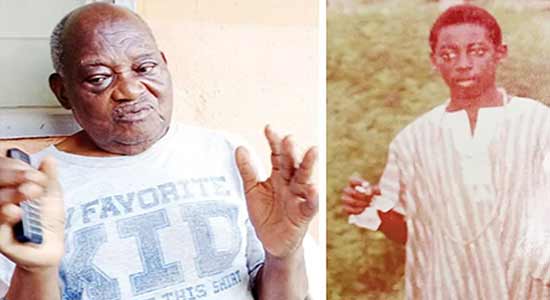 An 85-year-old man, Pa Oluwole Adewumi, has expressed worry over the whereabouts of his first son, Wole, whom he said went missing for the past 35 years in the United States of America, According to Punch’s report.

Pa Adewumi, who is a United Kingdom-trained legal practitioner, said he would be the happiest man in the universe if he could set his eyes on his son before he died.

According to him, Wole was schooling in Florida, United States, before his disappearance.

Speaking with our correspondent on the matter at his residence at Oba Ile, in the Akure North Local Government Area of Ondo State, Pa Adewumi said his missing son was born in 1966 and started schooling in the UK before he (father) relocated his family to Nigeria.

He said after Wole and his sister finished primary and secondary schools in Lagos, he sought admission for the boy in the US, where he disappeared.

He said, “My son’s situation worries me a lot. I want to see him before I die. Almost every day, I think about him. I gave birth to him in 1966; he is about 55 now. If my son was around, he would have occupied a high position either in government or in the private sector now.

“The last time I saw my son was in 1986 in the US. I took him to America to study in 1983. I enrolled him at a pre-university school in Miami, Florida, in preparation for his admission into a higher institution.

“I was going to America to monitor his progress in school. I used to go to see him every year and sometimes I used to go twice a year. Anytime he was leaving for classes, I would stay in the library and wait for him until he was through and we would return home together.

“During one of my visits to him after he spent a year and a half in that school, the school’s Director of Students’ Affairs, one Mr Clayborne, a white American, saw me in the library and requested that I should meet him in his office.

“On getting to his office, he asked me if my son was born in America. I replied that no, he was born in England. I asked him why the question and he replied that they were surprised at the level of his intelligence.

“My son, Wole, is a highly intelligent boy. I am yet to see his match. I’m not saying that he is brilliant because there is a difference between brilliance and intelligence. Wole is very intelligent. Things that he started doing at age 10, even adults cannot do them.

Pa Adewumi said he had employed various means to search for his missing son but none yielded a positive result, adding that Wole’s elder sister, who is currently a Professor of Medicine in a Florida university, had also helped in the search to no avail.

He, however, expressed assurance that his son was still alive following revelations from spiritualists.

The octogenarian said he had planned to sue the US government over the disappearance of his son when he was advised to shelve the idea.

“I went spiritual and I was told that he was alive but under a little bit of captivity. I want to see Wole before I die. He is my only son of his mother. I’m now 86 years old,” the octogenarian added.