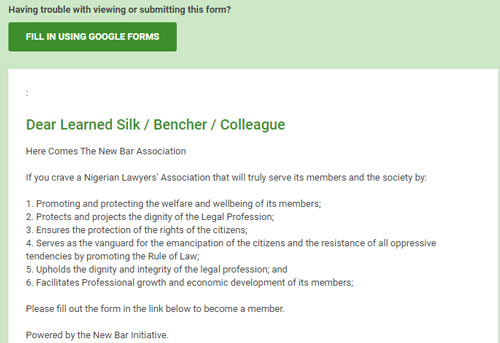 There is a rumor making the rounds in the legal community that a new faction of NBA has emerged.

“Dear Learned Silk / Bencher / Colleague
Here Comes The New Bar Association
If you crave a Nigerian Lawyers’ Association that will truly serve its members and the society by:

1. Promoting and protecting the welfare and wellbeing of its members;
2. Protects and projects the dignity of the Legal Profession;
3. Ensures the protection of the rights of the citizens;
4. Serves as the vanguard for the emancipation of the citizens and the resistance of all oppressive tendencies by promoting the Rule of Law;
5. Upholds the dignity and integrity of the legal profession; and
6. Facilitates Professional growth and economic development of its members;

“Please fill out the form in the link below to become a member.

Powered by the New Bar Initiative”. Information in circulation reads

The link to the form is https://docs.google.com/forms/d/1odgLB6uQ6wRPJWeloIkFLLhWUkokQJrM2K4QCSlTB6g/edit

The names of those behind the new NBA is not yet disclosed. However, TheNigerialawyer(TNL) confirmed that an email was sent to lawyers to register.

It is will be fraudulent for people to fill forms that they don’t know who are behind the group. This can also lead to identity theft.

This purported new association is coming at the heels of controversies surrounding the NBA national officers election held on August 29-30, 2020, which produced Mr. Olumide Akpata as president-elect of the Association

Sanction AGF And Any Other Person Involved In the RPC Amendment...