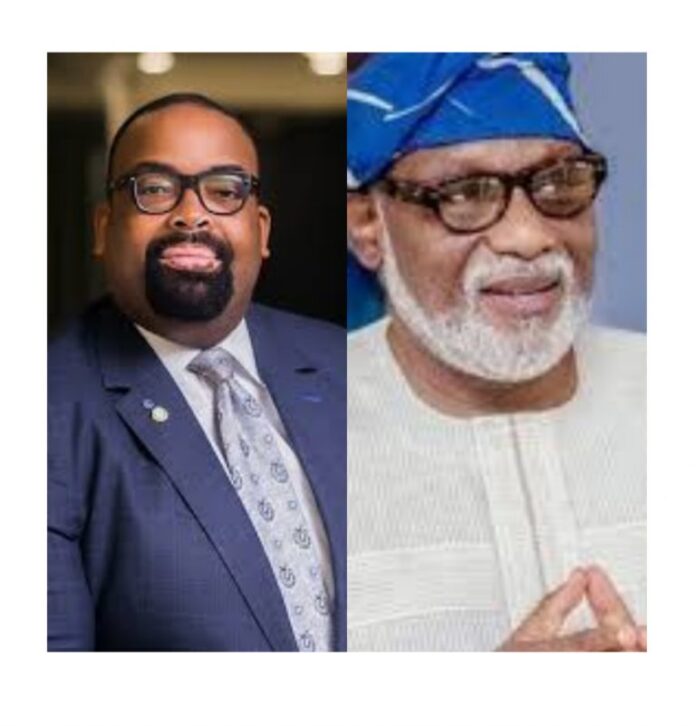 The Ondo state governor and former President of the Nigerian Bar Association, NBA, Rotimi Akeredolu, SAN, has kicked against the statement credited to Chief Niyi Akintola, SAN, referring to the immediate past President, of the association, Olumide Akpata, as a boy.

Akeredolu, in a statement personally signed by him and made available to newsmen through his Chief Press Secretary, Richard Olatunde, in Akure, cautioned against divisive utterances.

He said that the former NBA President, Akpata ” cannot be referred to as a boy under any circumstances.

The former NBA President said that “lawyers must avoid utterances which readily inflame passion and can cause division in the association.

Akeredolu equally charged members of the Bar to embrace peace and continue to work for the progress of the association.

The statement reads ” I have read several comments arising from the statement credited to my friend, brother and colleague, Chief Niyi Akintola, SAN. I am acutely aware of the passion with which he pursues his conviction on any matter.

“I am sure that he will, at a reflective moment, agree with all colleagues and reasonable people that our immediate past president, though junior in age and length of membership of our great association, cannot be referred to as a boy biologically or otherwise.

“As the President of our Association, he was the number one lawyer in the country without regard to the camp to which he belonged during the Bar elections, his religion, ethnicity and political affiliation.

“There are set rules for the executive leadership of the association. No elected member of the committee can act outside the scope permitted and envisioned.

“There are also established guidelines for redress in case of perceived infractions or infringement on the rights of persons or groups. The President of the Bar is primus inter pares.”

Akeredolu also condemned the growing tendencies which predispose members of NBA to act in manner considered very strange to the established tradition anchored on diffidence, respect and dignity.

“I must also not fail, however, to condemn, in very strong terms, the growing tendencies which predispose members of our great association to act in manner considered very strange to the established tradition anchored on diffidence, respect and dignity.

“It is not for ordinariness that we are called learned. Our rigorous training, at various levels, culminating in the Call to join the club of eminence, the age-long reverence with which our professional forbears were treated, the enormous responsibilities imposed on us by the very circumstances of our emergence as learned gentlemen and the expectations of the generality of the people, leave us no option other than to uphold the practice of excellence.”

He hailed the immediate administration led by Olumide Akpata for a successful annual conference and reawakening in the Bar.

“Let me start by congratulating our Association for the largely successful annual conference held in Lagos. I must congratulate the immediate past leadership for the reawakening in the Bar.

“An especial mention must be made of the former President, Olumide Akpata, Esq, for providing courageous leadership at crucial moments. Posterity will remember the members of the Executive Committee, under his exemplary leadership, for good.

“The administration left an indelible mark which will be difficult to erase. The tenure was hugely successful.

“I must thank the leadership of the Bar under Olumide Akpatas Esq. for the honour bestowed the foremost First female Senior Advocate in the country, Chief Folake Solanke, SAN, and my goodself, both prominent members of Egbe Amofin Odua, for naming a building each respectively after us for our modest contributions to the development of the Bar spanning several decades.

“We thank Olumide Akpata profusely, for this great honour and wish to also congratulate him for being able to take bold decisions for the benefit of members devoid of skewed partisanship and carrying members of the NEC with him.

” I enjoin the new leadership to tow this path of progress in the overall interest of the Bar.

“I beseech all our colleagues to shun all temptations to deepen this current misunderstanding in the interest of the association and, particularly, the people who look up to us for direction at crucial moments.

“My current engagement as the Governor of Ondo State has limited my participation, severely.

“I appeal to all senior members of the Bar to refrain from exacerbating the current situation. The Bar belongs not only to the professionals.

“The people of the country also lay claims to ownership deservedly. They cannot afford to have a divided and weakened Bar along ethnic or other divide.

“While congratulating the immediate leadership of the Bar who to the best of their ability prosecuted our conviction with courage, I enjoin the present Executive to work, seriously, on the discontents which threaten to tear us apart.

Tomorrow is here in Enugu State – By Onochiengwu Obuna Esq.