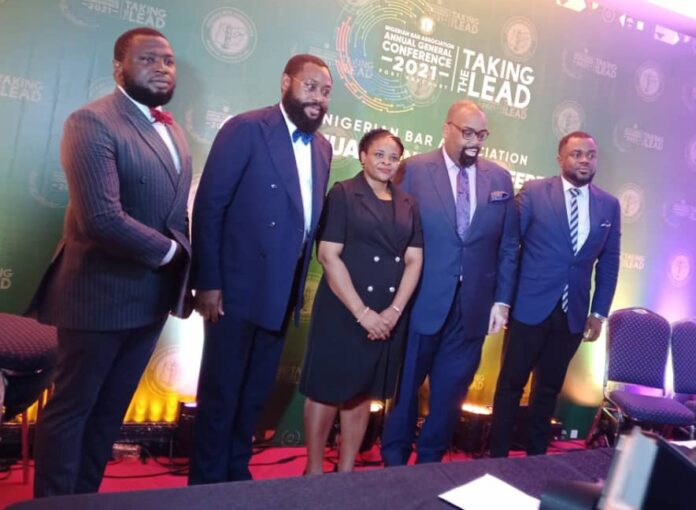 The President of the Nigerian Bar Association, NBA, Olumide Akpata has said that the NBA Annual General Conference will afford participants the opportunity to rewrite the African narrative as well provide a platform /instrument for diagnostic-prescriptive approach to issues impacting the legal profession and the nation.

Mr Akpata disclosed this on Thursday at a preconference chat with the press in Ikoyi, Lagos.

The NBA Czar said that discussions will be set rolling on an expanded purview of topics at the Conference poised to hold in Port Harcourt, Rivers State from Friday saying that a prescriptive approach to problems will involve telling individuals, entities, governments and stakeholders what they should do, rather than simply giving suggestions or describing what is done.

Mr. Akpata said a packed programme for the week will involve numerous sessions with everything from developments in the various practice areas to human rights issues and the rule of law, gender parity, harassment in the workplace, Independence of the judiciary, among others.

He recalled that last year, the annual high-profile event was only held virtually owing to Covid-19 restrictions.

“Due to the NBA’s resilience, for the first time ever, the Annual General Conference will hold as a hybrid event.”

He stated that about 10,000 individuals are registered for the 61st NBA-AGC.

On his part, Co-chairman of the Technical Committee on Conference Planning, TCCP, Prince Akin Ajibola corroborated the NBA President by emphasising the the Association’s preparedness to hold a world class conference as the NBA AGC has a reputation of being the largest gathering of lawyers and non legal professionals in Africa.

“By this hybrid conference, NBA will champion change and will continue to be proactive rather than being reactive,” said Ajibola.

Responding to a question put to him by a reporter that the NBA President doesn’t seem as vocal as he was when he began his administration in 2020, Akpata said has been at the frontline addressing and intervening in crucial matters of the bar and the general polity.

The NBA-AGC is one of the important venues for legal professionals to meet and network. It also serves to advance the development of law and its role in business and society.