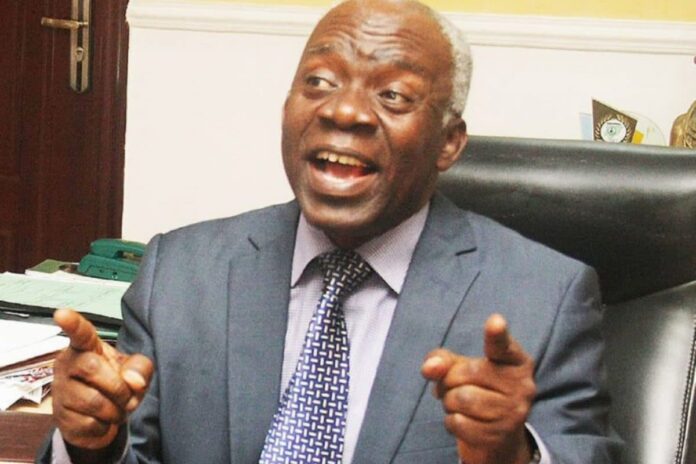 A human rights lawyer, Mr. Femi Falana, SAN, Wednesday said the arrest and suspension of Magu was a moral disaster for the anti-corruption drive of Buhari.

Falana, while speaking on ‘Your View,’ a programme on TVC, said it was expected that the person prosecuting others for corruption should not be enmeshed in the same crime.

He said the president has the right to order the investigation in the wake of a petition against the anti-graft boss alleging corrupt infractions.

“There is no doubt that this is a moral disaster for the anti-corruption crusade of the regime but we also have to appreciate the fact that the head of EFCC must be free from corruption.

The human rights lawyer said all the chairmen of the EFCC had left office under controversial circumstances, noting that some were accused of corruption while some were removed on the basis of insubordination.

Falana, however, said that Magu’s case was different because he is being tried by the regime that appointed him into office.
He refused to comment on the substance of the allegations levelled against the EFCC boss, stating that it would be a breach of Magu’s right to a fair hearing because the case is under investigation.

Asked if he would defend Magu if approached, Falana said: “I have not been asked but I believe he is entitled to a lawyer.”

But giving reasons why it would be difficult for him to act as Magu’s lawyer, he said: “I have never taken a case against the EFCC and I have never prosecuted a case for the EFCC because I also want to maintain my own independence so that I can join issues with the EFCC if I believe that it is going outside the provisions of the law.”

Olumide Akpata Should Be Worried About The Process Producing Him As...

2020 NBA ELECTION:Coalition Of Concerned Lawyers Calls On All Lawyers To...