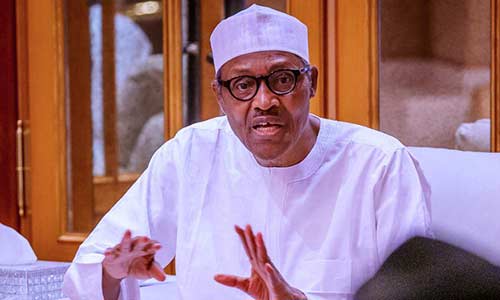 President Muhammadu Buhari has reiterated his position that Libya remains a major threat to Africa.
hari
He spoke at the 59th Ordinary session of the Authority of Heads of State and Government of ECOWAS in Accra, Ghana.

Buhari faulted the United Nations (UN) Resolution which expelled all foreign fighters in Libya, without first ensuring that they were disarmed.

The President complained that neighbouring countries were not adequately engaged to put in place modalities for containing the non-state actors.

Noting that the UN action was aimed at sustenance of peace in Libya, Buhari said it has created newer threats to peace and security in parts of the continent.

The Nigerian leader observed the huge humanitarian crisis across the Sahel, North, Central and West Africa, including the Lake Chad.

Buhari said the regions face a clear possibility of instability with the invasion of armed foreign fighters.

”It is imperative that ECOWAS leaders, at this Summit, decide how the UN-Sub-regional organisations partnerships should be reviewed to address the dangers that this UN Resolution poses to the region”, he added.