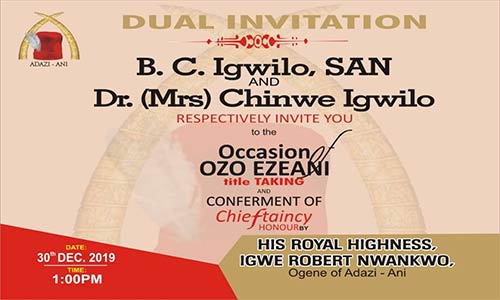 B. C. Igwilo, SAN And Dr. Mrs. Chinwe Igwilo are respectfully inviting the public to the occasion of Ozo Ezeani title taking and Conferment of chieftaincy honors by His Royal Highness, Igwe Robert Nwankwo, Ogene of Adazi – Ani.

TheNigeriaLawyer (TNL) reports that the Conferment shall be done by His Royal Highness, Igwe Robert Nwankwo, Ogene of Adazi – Ani.

Across the length and breadth of Igboland, the Ozo title is a major symbol of prominence. The title-taking event is typically organized with an abundance of yam, meat, wine, and other staple foods – all of which symbolize prosperity in Igbo culture.

Typically, for an Igbo man to become an Ozo title holder; he must be wealthy. This fact gave rise to the Igbo saying that goes as follows: “Ichi ozo bu maka ndi ogadagidi” which literally means: Taking the Ozo title is an affair for the high and mighty.

An aspirant for the Ozo title has to perform several preliminary practices after which he must inform the head of all titled Ozos of his community that he intends to join the group. The head of the Ozo group his community, in turn, informs other members of the group that the aspirant has an intention to join. The group of Ozos now sends feedback to the aspirant detailing to him, in the message, things he must to do before he will become accepted into the fold.

For instance, an Ozo title aspirant in a community – Abagana – must prepare sumptuous meals including drinks for members of the community for a specific number of times before he will be accepted and conferred with the title.

Ozo title being a sacred affair in Igboland is regulated by several traditional rules and customs. For instance, a man will never be titled an Ozo, no matter how many million times his wealth can feed the community if his father is still alive and has not taken the title himself. Another instance is when a man is a convicted murderer or thief, the Ozo title is denied him. It is forbidden that strangers hold the Ozo title irrespective of their contributions to the development of the community they find themselves in Igboland. More so, The obsequies trailing the death of an Ozo title holder is performed in a specially sacred way.

How do Igbos identify an Ozo titleholder?

An Ozo titleholder is easily identified by the beads around his ankle and the ankles of his first wife, and also the eagle feather fixated on his red cap.