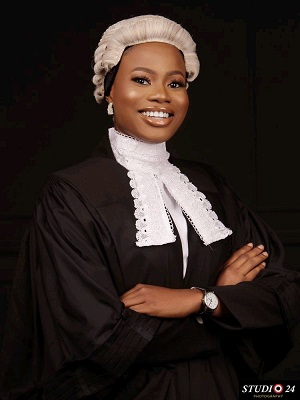 If academic perfection were a person, its name would be Bukola Alada. Since 2002 when five-year-old Alada got inspired by the Promasidor awards to high performing pupils in her primary school, she has had the world at her feet. Now 24, Miss Alada has turned every exam into a gold plaque, winning 11 awards from her alma mater, the University of Ibadan (UI), and 16 from the Nigerian Law School (NLS). The best graduating student at the NLS 2021 capped it all with a presidential award at the Nigeria@60 special awards. Alada, from Kwara State, shares her incredible story with ROBERT EGBE.

My name is Bukola Alada. I am 24 years old. I was born in Ibadan, Oyo State. However, I am from Ilorin West Local Government Area (LGA), Kwara State.

My father is a professor of physiology at the University of Ibadan while my mother, an accountant, runs her businesses. I am the second child of two children; my sister and I are lawyers now. I grew up in Ibadan and was educated in the university community from kindergarten.

I often talk about an event that happened when I was in primary 1; I think it was one of the things that helped me understand why I should aim to be the best. Promasidor (Cowbell) was in my school on the prize-giving day to give prizes to pupils who performed best in each class. They brought branded bags, Cowbell sachet milk, branded shirts, caps, certificates, etc. To my five-year-old self, it was very enticing. But I did not emerge as the best student in Primary 1 that day. Coincidentally, that session was one I also felt I could have done better. So, I put two and two together and told myself I was going to get the prize in Primary 2. I came top of my class in Primary 2, but Promasidor was not in my school that year. I did not get the Promasidor prizes till Primary 4 and in Primary 5. But, knowing that if I emerged as the best student, I could get such a reward which fascinated me was the reason for me to keep pushing each session. It did not help that I was not sure which year Promasidor would visit again.

I do not remember the exact point I had the desire or the exact reason (to study law). But my paternal grandfather was a lawyer and I have an aunt who is a lawyer. I had other options such as Economics and Mechanical Engineering but somehow, I found myself going back to law.

I attended the University of Ibadan; I graduated with a first-class and as the best student in my faculty in 2020. It was enjoyable. The environment was competitive enough to keep you on your toes. People took their studies seriously and aiming for good grades was the norm. It was easy to find people who had the same academic goals as I. The Cumulative Grade Point Average (CGPA) system at the university generally was demanding because I could not afford to underperform in one semester. But I accepted that I was going to focus on my school work for those five years.

There was also a lot going on besides academics – extracurricular activities. I joined student organisations, planned events, participated in debates and moot competitions. When I think about it, the extracurricular activities are often my best memories of university. Giving the valedictorian speech during my convocation would also count as one of my best memories.There were some downsides like disrupted calendars, and areas we wanted the school to do better at. But it is one period I enjoyed.

Law School not difficult, but stressful

Yes, it (Law School) was more stressful than I imagined. I do not think it was difficult, but it was definitely stressful.

I did not have a formula for success; I do not think anyone has anything like that. However, I aimed for a first-class from the beginning, and I was willing to dedicate time to law school. So, I focused on the good side of stories I read or heard when I resumed.

One of the most important things for me was constantly convincing myself it was doable and that I could achieve as much as others have. I spoke to my seniors, studied my notes, attempted past questions, class tasks, etc. I also prayed as much as I studied for God’s grace. There were times I had doubts; I was not sure I was going to make a first-class until I eventually saw my result, but I was willing to put my best forward. I did not want to wish I had done anything better.

My set also had its peculiarities due to the COVID-19 pandemic. We spent more time at home than in school. We ran the session with an indefinite calendar, online classes and then an abridged calendar earlier this year. We also did not have the usual externship. Adjusting to recorded videos was difficult, studying alone was difficult, yet the demands of the system were not any less. Even when we eventually resumed, the pressure was intense. We worried about our health as much as the exams. By the first calendar, we were to spend at least three months in school upon resumption. We resumed later than planned and the calendar became even shorter. On the good side, it was procedural so it had a better semblance to practice. I also got to meet people from other schools and experience a new environment and culture.

I won a total of 27 academic awards from UI and the Nigerian Law School. These include Gamaliel O. Onosode Scholarship, Departmental Prizes across three of four departments, etc. in UI. At the Nigerian Law School, Best Student of the Year (1st Prize) (three awards), Most Promising Graduating Student of the Year, Director-General’s Prize for 1st Class, Council of Legal Education Star Prize, etc.

I started my National Youth Service Corps (NYSC) programme and I currently work at a law firm in Lagos, Banwo & Ighodalo. I already got my offers before our law school results were released, so being the best student from the law school did not influence that. Expectations are less definite now and so there is less pressure. There are different paths to success from here, so it is more difficult for there to be set expectations.

However, since I was announced as the best student, I have received a Presidential award, as part of the Nigeria@60 special awards and an award for academic excellence from the Kwara State government. I have also had better access to people in my industry. That also comes with access to information and knowledge, and I am grateful for that. I have also had platforms to speak to students and offer advice on pursuing academic excellence.

I think the grading system is unfavourable and I do not think it significantly contributes to making us better lawyers. It is important that every student obtains a pass mark on every course. However, having classes of degree for a programme where no degree is awarded at the end of it is rather surprising. But what is worse is that the class of degree is awarded based on one’s least score of the five courses and not based on an average performance. There is also the fact that there are many ambiguities around the grading system generally.

I believe students are right to have complaints. But to students who are not in position to make things better, my advice is to put your best foot forward and try to beat the system as much as you can. It would not be easy, you may not achieve all you want but the satisfaction is in knowing that you tried your best. If you try, you have a good chance of beating the system. If you do not try, you have no chance.

Should wig and gown be scrapped?

I think it is a question of relevance for me. How relevant is it to the practice today? I do not think one needs to wear a wig and gown in a courtroom to make one’s case. Every court has the Bar where lawyers sit, so it is easy to identify who is a lawyer. It is also quite uncomfortable for the weather in Nigeria. The arguments in favour of it often revolve around preserving a culture of the profession. I generally do not find it convincing.

I would choose Professor because it is what appears attainable given by career interests. To be a SAN or a judge, one must be actively involved in dispute resolution practice. I am currently interested in the transaction aspect of law. I am more interested in practising as a solicitor than as a barrister. So, while I do not actively think about being a Professor, I think it would be interesting to teach law.

If I had a second chance, it is unlikely that I would choose law. I think I would choose something in technology. It is less jurisdictional and offers more freelancing options, unlike law. I listen to music, play games, dance, listen to podcasts, watch movies, read books etc. I enjoy memoirs, autobiographies and African literature generally. I also spend a lot of time on the internet. Sometimes, I’m developing myself in other ways, learning a language or a new skill.

My plans include getting an LLM in a chosen area of law from an Ivy League (school), carving a niche for myself and becoming an expert in that field. I hope to continue to offer solutions to complex legal problems. Broadly, and in the longer term, I want to contribute to development – infrastructural, economic – in Nigeria and on a global scale.