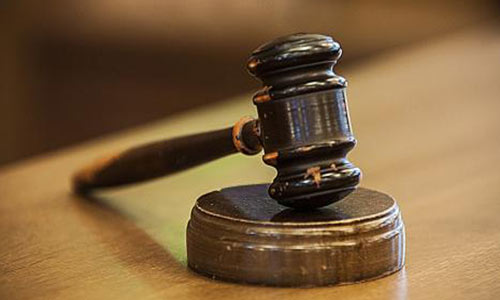 One person was on Tuesday, injured at the venue of the Ondo State Election Petitions Tribunal sitting in Akure, the state capital.

The victim, a member of the Peoples Democratic Party, Eyitayo was allegedly attacked by thugs suspected to be members of the National Union of Road Transport Workers, NURTW.

The incident happened when the PDP member tried to gain access through the gate of the Tribunal.

The thugs allegedly led by the Chairman of NURTW and Chieftain of the All Progressives Congress, APC, Jacob Adebo, popularly known as ‘Idajo’ had in their numbers stormed the gate of the Tribunal as they intimidated members of the opposition PDP.

Meanwhile, during the Tribunal led by Justice Abubakar, dismissed two out of the three petitions filed by three political parties and their candidates to contest the result of the October 10 poll.

The petitions filed by All Peoples Party, APP, and Action Alliance, AA, were dismissed for non filling of the pre-trial forms with the tribunal awarding N100,00 cost against the petitioners in favor of each set of respondents .

With the development, only petition filed by the PDP candidate, Eyitayo Jegede, against the victory of Governor Oluwarotimi Akeredolu, will be addressed by the court.

Jegede is challenging Akeredolu’s victory on the grounds that the election was marred with irregularities and pockets of violence as well as intimidation.

Jegede, who is praying that the court should declare him the winner of the election also filed that Akeredolu was not validly nominated as the candidate of APC.