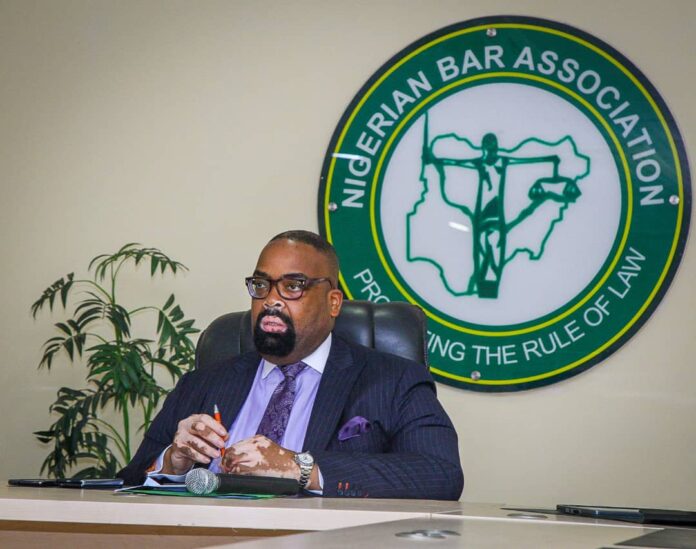 The President of the Nigeria Bar Association NBA, Olumide Akpata, has Condemned the arrest and detainment of suspected looters or curfew defaulters without their arraignment in court within the stipulated time by law.

In a statement released on Thursday night, October 29, Akpata said that the suspects should be immediately charged to court as the law dictates or that they should be released.

Read the full statement below

1. I have in the past 24 hours received several calls and complaints from Lawyers and Nigerians generally, about the recent public parade of hundreds of persons arrested and detained by the Nigerian Police on the suspicion of taking part in the looting and destruction of public buildings and private businesses and/or for contravening the curfew declared by various State Governors in the aftermath of the #EndSARS protests that unfortunately turned violent.

2. As I have continuously maintained, the Nigerian Bar Association (“NBA”) is completely opposed to any act of arson, vandalism, destruction of public or private assets, or other forms of force or violence. However, the legal rights of citizens who are arrested on account of such allegations must be respected, especially their right to the presumption of innocence.

3. In many, if not most of these cases, these people, who it must be noted are first and foremost Nigerian citizens, have been held incommunicado for days without access to their families or legal practitioners of their choice and under inhumane or deplorable conditions in brazen breach of the express provisions of the Constitution of the Federal Republic of Nigeria 1999 (as amended) which presumes all suspects and defendants innocent until proven guilty; prohibit the detention of citizens beyond 24-48 hours; forbid the subjection of Nigerian citizens to torture or to inhuman or degrading treatment; and mandates the Police and other law enforcement agencies to bring such persons to court within 24-48 hours.

4. It beggars belief that this conduct by the Nigerian Police is coming on the heels of the #EndSARS protests which were precipitated by the historical abuse of citizens by men and officers of the Nigerian Police especially those of the now defunct Special AntiRobbery Squad (SARS), and the aftermath of which is yet to fully die down.

5. It is highly regrettable that the Police in particular continues to carry on business as usual despite being in the eye of the storm in recent times and in disregard of the wide outpouring of condemnation by Nigerians at home and abroad as well as foreign nationals and international organisations about the misconduct of some of their officers. This gives the indication that the Police hierarchy has failed to get the message and/or is paying lip service to the calls for holistic Police reforms.

6. The NBA once again calls on the Nigerian Police and the Attorneys General of the various States to immediately charge the suspects before courts of competent jurisdiction in accordance with contemporary requirements of the law, or to release them unconditionally. The wanton destruction of public buildings and private businesses witnessed in the past week is highly regrettable. However, the cure for illegality cannot be illegality.

7. I have asked the Chairpersons of NBA Branches across the country to immediately monitor Police Stations within their jurisdictions to ascertain the extent of compliance of the Police with the fundamental rights provisions of the Constitution to enable us take or facilitate adequate enforcement actions.