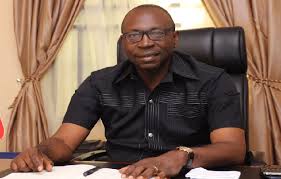 The Federal High in Benin on Friday refused an application brought by the embattled candidate of the All Progressives Congress (APC), Pastor Osagie Ize-Iyamu, for an order compelling INEC to accept him as the party’s candidate in the September 19 guber polls in Edo. The case with Suit No. FHC/B/CS/61/2020 has Pastor Osagie Ize-Iyamu as the Plaintiff, with APC and the Independent National Electoral Commission (INEC) as defendants.

The Plaintiff’s application is seeking for an Order of Court to direct INEC to accept his name as the APC candidate, as may be forwarded by any National officer of the party. The application was not granted. The court directed that the Defendants be put on notice and the matter was adjourned to Monday, 29th June, 2020 for hearing.

It will be recalled that Hon. Victor Giadom, as the Acting Chairman of the APC, about a week ago forwarded two correspondences to INEC informing them to receive and send correspondences only from him and that the Edo primary election was postponed indefinitely. The correspondences were accompanied with court orders confirming him as the Acting National Chairman of the APC. But, in a sudden twist of events, the National Executive Committee of the APC, in its just concluded emergency meeting, which was presided over by Hon. Victor Giadom, dissolved the National Working Committee of the party and in its place appointed a Caretaker/Special Convention Committee headed by the Governor of Yobe State, Mai Mala Bunu.

The foregoing development has generated a constitutional crisis within the party, as the body is not a recognized organ within APC’s constitution. Also, Article 17(iv) of the party’s constitution prohibits an elected government official from occupying any elective principal position within the party structure. It reads ‘No officer in any organ of the party shall hold executive position office in government concurrently’. As this fresh litigation of the APC candidate lingers in court, all eyes will now be on INEC to see if it will bulge on its earlier position on abiding strictly with existing court orders and the dictates of the law.