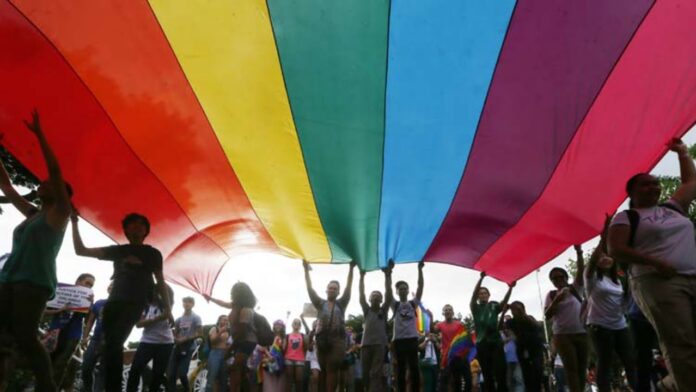 The alliance of Christian organisations in the Caribbean under the aegis of Caribbean CAUSE have demanded the immediate removal of homosexual flags being flown at United States embassies in the region.

The Caribbean CAUSE has called upon the Carribean Community (CARICOM) Heads of Government to reject what they described as ‘devious act of aggression’ and by doing so, assume self-respecting control of the region’s diplomatic relations with the US.

The group accused President Joe Biden of being the de facto leader of the Homosexual/Bisexual/ Transgender movement because of his use of the Office of the President of the United States to advance his personal convictions about “this shockingly evil, depraved and naturally illogical, ideology.”

41-year-old man reveals reason behind homosexual act with minors
The letter, addressed to all the CARICOM Heads, was conveyed by Dr Wayne West Chairman, Jamaica Coalition for a Healthy Society on behalf of the Caribbean CAUSE.

The Caribbean CAUSE, an alliance of Christian organisations challenging anti-biblical and anti-scientific ideologies, law and policies in the public
sphere and working towards stability and sustainable development of the region by defending and promoting biblical values in their respective Caribbean societies and beyond, among other things, said they are disappointed but not surprised that the US administration led by President Joe Biden has decided to fly the multi-coloured Homosexual-Bisexual-Transgender flag at US embassies around the world.

“We draw to your attention, the following: We are disappointed but not surprised that the US administration led by President Joe Biden has decided to fly the multi-coloured Homosexual-Bisexual-Transgender flag at US embassies around the world. We are not surprised because this flag celebrates sexual nihilism, sexual anarchy, and gender confusion,” the organisation added in the letter obtained by DAILY POST.

“President Joe Biden is the de facto leader of the Homosexual Bisexual�Transgender movement because of his use of the Office of the President of the United States to advance his personal convictions about this shockingly evil, depraved and naturally illogical, ideology.

“Cultural insensitivity and disrespect for developing nations, especially those in Africa and the Caribbean, remains a hallmark of the increasingly sexually debauched and sexually-deluded policies of the United States of America.

“One cannot help but grimace at the folly of a government that, in the face of indisputable evidence, continues to defy God, scientific fact and pure common sense to celebrate the delusion that sex is non-binary and gender is fluid.

“The United States of America has decided to use its sovereignty to reframe deviance as ‘rights’ and to bring its laws and policies in line with this ideology.

“This Pandora’s box spills out intolerance and injustice. It leads to the sexual miseducation of children, the hijacking of femininity through the transgender movement and the violation of bona fide human rights such as freedom of expression and freedom of conscience.

“Be that as it may, associating the homosexual Flag of Folly with the Stars and Stripes is well within their right.

“However, it is NOT the right of the USA or any other country to abuse diplomatic privileges to toxify another nation with its degenerate cultural values.

“This is the bigoted assault on the sovereign equality of nations, so characteristic of US foreign policy.

“The Caribbean CAUSE has called upon the CARICOM Heads of Government to reject this devious act of aggression and by so doing, assume self-respecting control of the region’s diplomatic relations with the USA.

“Mr Secretary-General, you will be aware that the flying of the homosexual flag promotes behaviours that offend various laws of individual Caribbean territories and is contrary to Articles 3 (1) (e), 20 and 41 of the Vienna Convention on Diplomatic Relations, 1961.

“We hasten to point out that this socio-political issue is fundamentally spiritual, a mark of rebellion against the image, purposes and plans of the Sovereign God. Leaders of both developed and developing nations would do well to consider Psalm 2: “Why are the nations so angry? Why do they waste their time with futile plans? The rulers plot together against the LORD and against his anointed one.

“‘Let us break their chains,’ they cry, ‘and free ourselves from slavery to God.” But the one who rules in heaven laughs. The Lord scoffs at them.’

“We have urged CARICOM governments to immediately call for the Homosexual-Bisexual�Transgender flags being flown at US Embassies in our territories to be taken down, and to resist the pressure to join those developed nations contesting with the Sovereign God.”