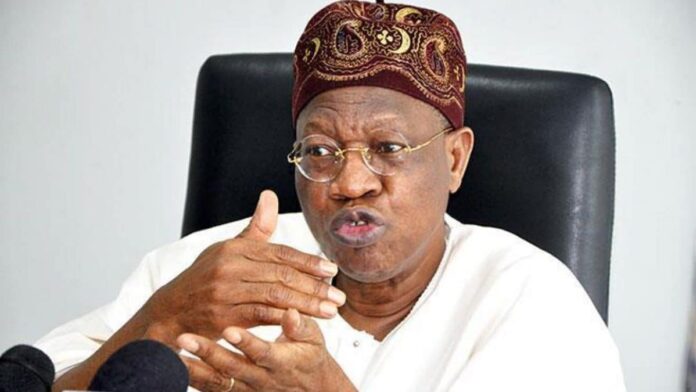 The Federal Government says the ongoing border drill is neither targeted at any region nor designed to cripple businesses in any part of the country as being insinuated by some conspiracy theorists.

The Minister of Information and Culture, Alhaji Lai Mohammed stated this on Monday when he led a federal government ministerial delegation on inspection and assessment of the drill at the Magama Jibia border post in Katsina state.

News Agency of Nigeria (NAN) reports Ministers of State Budget and National Planning, Clement Agba, Industry, Trade and Investment, Hajia Maryam Katagum are in the delegation on the inspection of the Nigeria’s North-West border with Niger Republic.

Mohammed said contrary to the view of the conspiracy theorists, the partial border closure was ongoing in four geo-political zones of the country – South-South (Sector 1), South-West (Sector 2), North-Central (Sector 3) and North-West (Sector 4).

He explained that the main reason for embarking on the drill was to protect the country against transnational security concerns such as smuggling, proliferation of small arms and light weapons; irregular migration as well as terrorism and armed banditry, among others.

Mohammed said the challenges at the borders vary from one sector to the other.

He said while the challenge in Seme border (sector 2), inspected by the delegationon Nov. 25 was mainly rice smuggling, that of Jibia (sector 4) included fuel smuggling, illegal migration and importation of arms and ammunition.

The minister said, since the exercise commenced over three months back, local businesses across the country have continued to thrive, as farmers and rice millers in particular are having turnover on Investments.

He said that the border drill had, so far curbed the smuggling of foreign rice into the country in addition to other prohibited items; Increased the monthly import revenue by over 15 per cent.

The minister said the border drill had also led to significant seizures with estimated monetary value of over N3.5 billion; reduced local fuel consumption by 30 per cent as well as reduced the importation of arms, ammunition and drugs.

Mohammed said that out of the four sectors affected by the drill, the North West including the Jibia border post has recorded the highest success in terms of reduction of illegal migration.

“We have a lot of good news to report, regarding the benefits of the drill from this post.

“As a result, we have recorded a reduction in cases of cattle rustling, kidnapping, armed banditry which were predominant in the North-west region, these acts have now been significantly reduced.

“The arms and ammunition being used by violent extremists and criminal elements no longer make their way into the country through the land borders.

”Of course, this will also have a negative effect on the insurgency,” he said.

The minister said that smuggling of petroleum products out of Nigeria had been greatly reduced, especially with the closure of filling stations along the border.

“There are hundreds of filling stations along the border and 50 per cent of them are owned by foreigners, set up purposely for smuggling.

“They don’t sell the fuel consignment they receive to the public. Now that they are closed, we have recorded over 30 per cent in domestic fuel consumption,” he said.

NAN reports that no fewer than 40 of the closed filling stations were seeing along the road only in Magama village with about 2000 population.

The minister said that government had recorded over 30 per cent increase in revenue since the drill.

“Before the drill, the borders contributed nothing to the revenue. Customs was recording about N4. 5 billion daily.

“Since the closure, the figure has increased to between N5 billion and N8 billion daily,” he said.