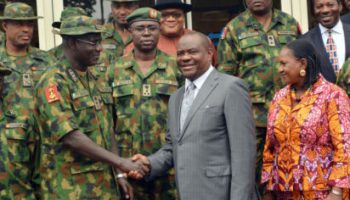 The 6 Division of the Nigerian Army, Port Harcourt, has deployed troops for the commencement of ‘Operation Crocodile Smile IV’ in four Niger Delta states.

The News Agency of Nigeria reports that the medical outreach in Obio/Akpor and Ogu/Bolo Local Government Areas signalled the commencement of the operation in the state.

Sarham said the division would carry out the operation in Akwa Ibom, Bayelsa, Cross River and Rivers states.

He said, “This operation is intended for troops to improve on operational, administrative and logistics proficiencies as well as civil-military cooperation aspects in a military operation.

“The operation will be conducted in both land and waterways to checkmate security challenges in the Niger Delta, including militancy, pipeline vandalism, illegal oil bunkering, cultism, kidnapping, among others.”

The army chief said the exercise recorded successes since it was first launched in the Niger Delta in 2016.

“Operation Crocodile Smile has achieved significant successes in the protection of oil and gas infrastructures as well as checkmating crimes since its inception three years ago.

“However, the successes were achieved as a result of the good synergy between the army, navy, air force and other security agencies

“Also, this year’s exercise will also witness collaboration or joint efforts between the Nigerian Army and its sister security agencies,” he said.

Sarham urged the people to carry out lawful economic and social activity without fear of intimidation and molestation by troops during the operation.

He called on the people to participate in the free medical outreach designed to test and treat minor ailments in the area.

“We are also appealing to law-abiding citizens to report all forms of criminalities to forestall any negativity on economic activities in the Niger Delta,” he said.

The GOC assured Rivers people that military personnel would not molest law-abiding citizens.

He said, “The Nigerian Army, being a professionally responsive organisation under the leadership of Lt.-Gen. Tukur Buratai, the Chief of Army Staff, is out to discharge its constitutional role and will not molest or inconvenience any law-abiding citizen.”