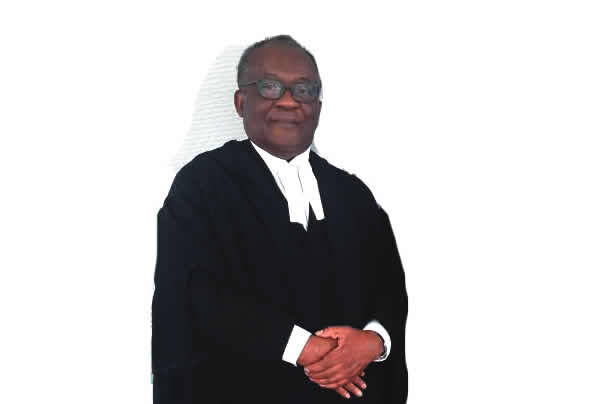 Our hearts are still heavy but we must thank God for a life of impact that you led for humanity.

I used to call you “the repository of Nigeria history”; and “a legal historian”, for I’m always in awe of your seeming inexhaustible storehouse of diverse knowledge and legal experience. I always admired the way you articulate your legal thinking with clarity and gravitas at the weekly Chambers meetings or be it at case strategy meetings. The “small points” sessions with you at Chambers meetings were always memorable. Chief would often remind us: “know your judge and their background” and at the relevant time, warning us to beware that “fair hearing is an opportunity to be heard; and not an absolute right.” or “a magic wand to upset every unfavourable ruling”. We will miss your fatherly presence in particular and how you used to regale us with tales of your legal exploits during your active years. A consummate luminary, cosmopolitan and cultured with class and panache.

A boss of uncommon grace, kindness and compassion. Thank you for a rare privilege of being mentored under your tutelage and unique culture, conceived and nurtured in the best traditions of the Bar, some of which I resent for being too conservative for present day practice. For instance, you declined every move to mount a small nameplate on your perimeter fence on Victoria Island as notice of your presence and law practice to the world. Chief’s rich and iconic background of being raised and legally trained by his own father, the legendary Chief FRA Williams, SAN, CFR clearly rubbed off on him.

I couldn’t thank you enough for litigation exposure. You were a good boss by every standard, you never discriminated between us and your children in assigning case files or while constituting a legal team to handle a particular case (high profile or otherwise) but did so based on each lawyer’s core competence and unique skill sets. This makes for team cohesion, harmony and the friendly atmosphere in the chambers. I guess you must have had a premonition of your impending departure for barely two months ago, you called me and mooted the idea of your testamentary arrangements and disposition, which assignment I cleverly avoided for I saw it as being too big for me. You gave us the best platform and facilities any lawyer could wish for in practice. You taught us the importance of adequate and timely chambers preparation for court and to always have a back up copy for every court processes so as to outsmart the venality and sharp practices of the system.

Also, your liberality is equally demonstrated by your open library policy. Your library remains open to all chambers alumni, including law school externs; despite that some abuse your generosity by poaching your precious books. I was once there when your called the Chambers book vendor to supply a replacement for a missing book – Gaitley on Libel- since you needed it urgently then, at the cost of N150k only to find the missing copy abandoned inadvertently in one of the lawyers’ offices. My only regret is the wealth of knowledge you took to the grave and my inability to tap enough thereof.

We all knew that once chief believed in a cause, he would pursue it tenaciously to a logical end without minding whose ox is gored and sometimes even staking his personal liberty in defence of victims of the oppressive system. A voice to the cheated and downtrodden; the oil-spill impacted community of Gbaraun Kingdom whom you tried to save, through a legal tussle with Agip for damages/compensation claims, till your last moment, have been left devastated since the shocking news of your passing broke out. You won the first round of the legal battle for them at the Federal High Court, Yenagoa, Bayelsa State, but which case is now languishing on appeal no thanks to our sluggish civil justice system.

Your practice life was particularly distinguished and significant for a number of precedent-setting decisions and milestones, one of which had even inspired a legislative intervention with respect to admissibility of computer generated statement of account under the repealed Evidence Act. See FRN V. FANI KAYODE & 2010, 14 NWLR (Pt.1214). You have contributed your own bit in advancing the frontiers of our civil jurisprudence and development of the law. Now do have a well deserved rest in the Lord sir.