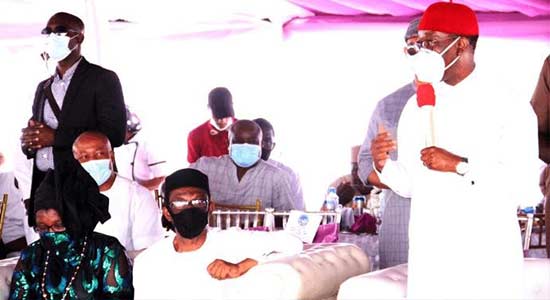 Governor Ifeanyi Okowa of Delta State, Monday, said most roads constructed by the Niger Delta Development Commission (NDDC) do not last because the commission does not pay appropriate attention to Bill of Quantities (BOQ).

He said the commission must put more emphasis on BOQ so as to enable its road projects stand the test of time.

Okowa said this at Idumuje-Unor, Aniocha North Local Government Area of the state, during a grand reception in honour of Justice Samuel Chukwudumebi Oseji on his elevation as Justice of the Supreme Court.

He was reacting to a passionate appeal by the community to prevail on NDDC to complete the Onicha-Uku/Idumuje-Unor Road awarded in 2012.

Okowa noted that there was need for a review of the contract because the value of the naira had weakened over the years.

Today, the naira is weak and the N245 million cannot construct a road of 3km, he said.

“Let me use this occasion to congratulate our brother who has made us proud because there are so many judges out there.

“I am glad I am here again at Idumuje-Unor, the first time was to inaugurate the Idumuje-Ugboko/Idumuje-Unor road and now as the community honours their own whom God has elevated as a Justice of the Supreme Court.

“While congratulating you for mobilising your sons and daughters for this epoch-making occasion, I have taken note of your requests,” Okowa said.

He said all communities must rise up to make use of opportunities like this to make requests for the development of their communities.

“I have taken note of the secondary school and the Primary Health Care Centre and we will continue to intervene as a state with support from our interventionist agencies and development partners.

“Because of COVID-19, the finances of governments have been largely affected especially in Nigeria and it is our prayer that we have a better year in 2021.

“Some of your requests will be attended to so that it will be remembered that when Governor Okowa visited for the grand reception in honour of our brother, the community got the needed assistance from the state government,” he stated.

Chairman of the occasion, Augustine Odinma, a professor, said the community was constructing a mini-stadium to encourage youths into sports and also discourage rural-urban migration.

He said Okowa’s contributions to the development of Idumuje-Unor Kingdom was unprecedented and thanked the governor for the construction of Idumuje-Unor/Idumuje-Ugboko road and other projects in the community.

He sought the assistance of the governor in the completion of the Onicha-Uku/Idumuje-Unor Road awarded by the NDDC since 2012.

On his part, the traditional ruler, Obi Charles Chukwunwike Anyasi III, said it was big burden stepping into the shoes of his late father who was the longest-serving monarch in Africa and the second in the world.

The royal father said God had been faithful to the kingdom as sons and daughters of the community were doing well in their various endeavours.

He noted that Justice Oseji and his wife, Minnie Oseji, had performed creditably well in the development of Idumuje-Unor Kingdom and prayed to God for a day to come when he will be elevated to the Chief Justice of Nigeria (CJN).

The celebrant, Justice Oseji said he was humbled beyond expectation as his life has always been that of the grace of God.

He said he never ventured to lobby for anything as he had always found himself in a position he never lobbied or struggled for even as he thanked Governor Okowa for gracing the occasion.