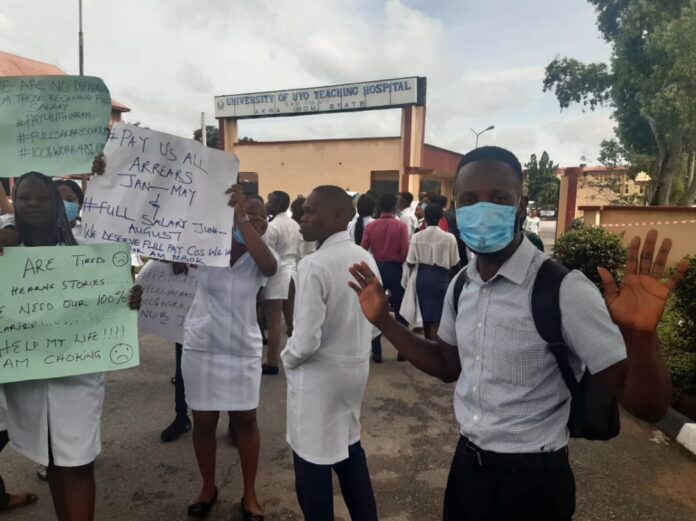 Medical interns at the University of Uyo Teaching Hospital (UUTH), on Tuesday, barricaded the gates of the hospital in protest of unpaid wages as well as the management decision to Slash salaries.

The protesters were seen carrying various placards that read, “Pay us all arrears, January to May”, “We are tired of hearing stories”, “We need our 100 percent salaries”, “We are no different from those receiving full salaries”, “Jesus is not happy with you,” among others.

Some of the protesters who spoke with journalists said, the protest was their last resort as all their pleas to the management to pay their wages were ignored.

One Gracious Ogunkola, a Pharmacy intern, disclosed that their internship would elapse in two months and wondered when their full salaries would be paid.

She said, “We are protesting because the hospital is not responding to our calls. We are asking them why are they not paying us our full salaries.

“We are working and our schedules are overstocked, we are overworked, but we are not getting our money. January, they paid us just 60 percent, the same thing in February, March and April. By May, June we were not even paid and we were asking them, ‘what is happening with our money?

“After months and months of dialogue, the next thing we saw was a reduction from 60 percent to 48 percent. So we are asking them questions, ‘tell us what is happening, they are not answering us.

“We met with the management on two occasions, they said there was a shortfall from the Federal Government”.

One other said, “Why should they compare us with Calabar? They should compare us with Enugu, Umuahia, Bayelsa, they are paying them 100 percent there, not only Calabar. Calabar is their partner in crime”.

In reaction, the Public Affairs Officer of the medical institution, Mr Offong Offong said the partial payment of interns was a national issue adding that it was not peculiar to UUTH

He said “It is a nationwide matter. It is not a UUTH matter. We have made our presentation to the government and we are awaiting the outcome of that presentation.

“Whatever the decision of the FG, we will implement, but we don’t know how long it will take. We are hoping it will be soon,”