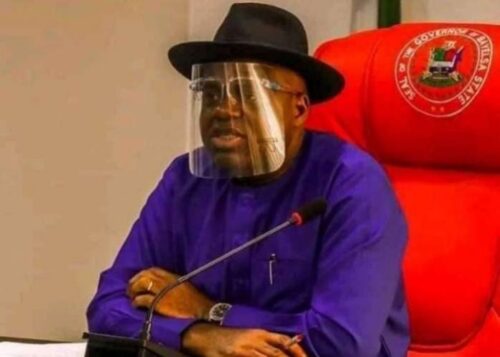 The Bayelsa State Governorship Election Petition Tribunal sitting in Abuja has concluded the hearing and reserved its judgement on the petition seeking to sack Governor Duoye Diri and his Deputy, Senator Lawrence Ewhrudjakpo.

The governorship candidate of Liberation Movement, LM, in Bayelsa State, Vijah Opuama, had in the petition he filed to challenge the outcome of the last gubernatorial election in the state, alleged that Senator Ewhrudjakpo submitted forged documents to the Independent National Electoral Commission, INEC.

He alleged that the Bayelsa deputy governor gave false information in the Form CF001 he tendered to INEC for the purpose of the governorship election that held in the state on November 16, 2019.

He is praying the tribunal to disqualify Governor Diri, his deputy, Ewhrudjakpo and their political party, the Peoples Democratic Party, PDP, and order for a fresh election without the disqualified party.

Cited as respondents in the petition are INEC, the PDP, governor Diri and Senator Ewhirudjakpo.

The Justice Ibrahim Sirajo-led three-member panel tribunal reserved the case for judgement after all the parties adopted their final briefs of argument.

Meanwhile, in his final written address that was adopted by his lawyer, Chukwuma-Machukwu Ume, SAN, Bayelsa deputy governor, urged the tribunal to dismiss the petition he argued was bereft of merit.

He further contended that section 137 (1) (a) and (b) of the Electoral Act, clearly specified that only a candidate in an election and a political party which participated in the election, could lodge a petition to challenge the outcome of such election.

He noted that sub-section (2) of the provision stipulated that “a person whose election is complained of is, in this Act, referred to as the respondent.”

Ewhrudjakpo, therefore, argued that the Electoral Act does not allow him to institute an election petition and as such he could not also be sued in that regard.

The Bayelsa deputy governor likened his case to that of an underaged person who can neither vote nor be voted for in an election.

Besides, his lawyer drew the attention of the tribunal to the grounds of the petitioners’ suit which border on the credentials of the deputy governor, arguing that it is a pre-election and therefore statute-barred going by the provisions of Section 31 Paragraph (1), (5) and (6) of the Electoral Act 2010 as amended.

Quoting copiously from the Electoral Act 2010 as amended, Ume, said, “Any person who has reasonable grounds to believe that any information given by a candidate in the affidavit or any document submitted by that candidate is false may file a suit at the Federal High Court, High Court of State or FCT against such person seeking a declaration that the information contained in the affidavit is false.

“If the court determines that any of the information contained in the affidavit of any document submitted by that candidate is false, the court shall issue an order disqualifying him from contesting the election.”

In addition, Ume informed the tribunal that exhibits P9 and P12 which are copies of a recent Supreme Court judgment, which nullified the election of the APC governorship candidate in the November 2019 poll based on a pre-election suit lodged at the Federal High Division Abuja, has further exposed the irredeemable flaws in the petitioners’ suit.

He argued that since the crux of the petitioners’ case bordered on pre-election issues, they ought to have within 14 days after the alleged false particulars were submitted to INEC, taking the matter to court.

Ume urged the tribunal to dismiss the petition for lacking in merit and for being statute-barred.

After the tribunal listened to all the parties, it reserved its judgement to a date to be communicated to them.

NBA Gwagwalada Joins Lists Of Beneficiaries Of Solar For All Promo...

[SAVE THE DATE]: NBA Anaocha Branch to host the 3rd Quarterly...