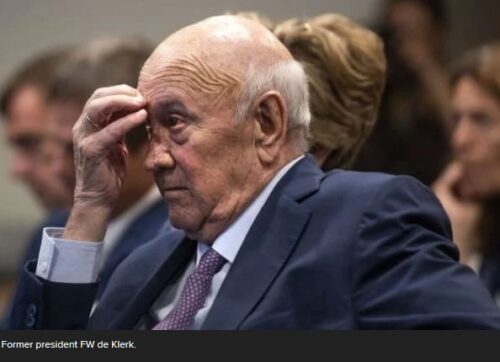 The American Bar Association on 21st June, 2020 cancelled its planned programme with former president FW de Klerk after a flood of objections from, among others, former Truth and Reconciliation commissioners, human rights activists, American academics and the son of slain Cradock Four anti-apartheid activist Fort Calata.

“Presenting the programme would not help the association advance our Goal III priority,” it stated, in reference to its aim to “eliminate bias and enhance diversity” by promoting “full and equal participation in the association, our profession, and the justice system by all persons” and eliminating “bias in the legal profession and the justice system”.

De Klerk’s spokesperson Dave Steward did not respond to requests for comment.

Fort Calata’s son Lukhanyo – who was the first person to write to the ABA and ask it to reconsider its De Klerk invitation said that the association’s decision to cancel De Klerk’s address was “courageous… and we applaud them for their sensitivity to our cause”.

“Our wish is that organisations around the world will follow the ABA’s lead and give careful consideration before extending an invite to De Klerk to speak on matters that he’s wholly unqualified to opine on.

“We just wish that the National Prosecuting Authority could act as swiftly as the ABA in taking decisions to act against those implicated in the murders of the Cradock Four. For now at least we can mark the 35th commemoration of their murders, knowing that we had stopped De Klerk from taking a public platform where he would no doubt have dishonoured their lives and legacies.

“Instead, we should ensure that it is De Klerk’s legacy that is unveiled to the rest of the world, for them to see him in the same way we do, as a criminal that perpetrated crimes against our humanity. Hopefully the NPA will charge De Klerk soon, so that we can write to the Nobel Prize International Award to request them to reconsider their decision to award him a Peace Prize that he remains completely undeserving of.”

Calata maintains De Klerk was complicit in the 27 June 1985 state-sanctioned murders of his father Fort and his fellow teachers, Matthew Goniwe, Sicelo Mhlauli and Sparrow Mkhonto. The men became known as the Cradock Four.

In a detailed email to the ABA Lukhanyo Calata recounted why he believes that “De Klerk’s hands are dripping with my father’s blood, and the blood of his comrades”.

He refers to evidence that the order to assassinate the men, via “a Military signal, which called for their permanent removal from society on 7 June 1985” was “approved by highest echelons of the Apartheid State, these being the State Security Council and Cabinet of Ministers”.

“In 1985, De Klerk was a member of both the SSC and Cabinet. As the Minister of Basic Education and Training, he was often called upon for input in these meetings, with regard to the revolutionary activities of teachers Calata and Goniwe in the Eastern Cape. (There is evidence of this in Government notated minutes of record).

“The ‘signal’ appeared as an agenda item for a meeting held in Tuynhuys (the president’s official residence in the parliamentary precinct) on 12 June 1985. Record of attendance shows that De Klerk was present at this meeting.”

De Klerk’s spokesperson Dave Steward has previously strongly denied that his boss had played any part in the murders of the Cradock Four.

“Mr De Klerk was never aware of any instruction at any meeting of the State Security Council (SSC), or any other body, to murder anyone.”

The decision taken by the ABA International Law Section to cancel De Klerk’s address came after a number of local and international “concerned lawyers and academics” wrote a letter expressing their support for Lukhanyo Calata’s stance. They further vocalised deep disquiet over the planned speech and appealed to ABA members to reconsider the invitation.

“In academic settings, we do not generally support attempts to silence speakers with whom we disagree; we prefer instead to engage with them in a process of argument and counter-argument,” it stated.

“But this situation is different: an organization like the ABA, which represents the ethos of a profession has no obvious justification to offer a platform to Mr De Klerk. We assume that De Klerk is not being asked to engage in a dialogue, but merely to express his views. The invitation seems particularly insensitive, coming as it does in the wake of weeks of renewed protests against America’s long history of racial oppression and injustice, at a time of reckoning with the past and reimagining the future.”

The Pan African Bar Association (PABASA) on Saturday also formally objected to De Klerk’s speech in a five-page letter, in which it described the former president as a “unrepentant apartheid apologist”.

“Recently, De Klerk said that apartheid cannot be described as a crime against humanity because it cannot be equated with the holocaust genocide of Jewish people in Germany,” PABASA wrote.

“Such a statement, though unsurprising, betrays a sad disregard for black lives. An apology for this statement was issued, not by him, but by the De Klerk Foundation on his behalf. He remains in denial of the fact that apartheid was declared a crime against humanity by the United Nations Organisation. He remains in denial that the recorded brutal killing of the black majority constitutes a crime against humanity. He is unapologetically oblivious to the pain his apartheid machinery caused to the black majority in South Africa.”

Seattle University Law Professor Ronald Slye was one of a number of American academics who also wrote to the ABA to express “dismay at the decision by the ABA to highlight a talk by FW De Klerk as part of an annual meeting”.

In 1996, Slye organised a group of international law professors to make a submission to the TRC that apartheid was a crime against humanity – a submission which the Commission cited in its final report.

His foundation later said he expressed regret for “the confusion, anger, and hurt” his remarks might have caused.

“While one might view some of this — is apartheid a crime against humanity — as mere technical legal ‘quibbling’ (a word recently used by De Klerk), the impact of such denial is more far reaching,” Slye wrote to the ABA.

“It contributes to the continued hold of systemic and institutional racism in South Africa, just as our inability to come to grips with the legacy of slavery, the Civil War, and Reconstruction does the same here in the US.”

Slye added that “at a time when issues of race, racism, police violence, black lives matter, police reform/defunding, are front and centre on the US political agenda — when a US president expresses ignorance about the history of slavery and stokes the flames of division for political ends — giving a platform to someone who continues to fail to grapple in any meaningful way with the extreme harm that he and his party wrought on South Africa, seems at best tone deaf and at worst irresponsible”.