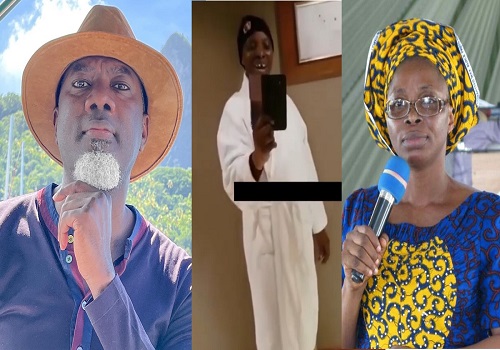 Former presidential aide, Reno Omokri, has reacted to a viral video of Evangelist Funmilayo Adebayo aka Mummy GO excitedly showing off her hotel suite in Dubai.

In the video, the controversial preacher is seen putting on a bathrobe as she walked around her suite showing off every part of it to her audience while she films.

The extreme joy could be heard in Mummy GO’s voice as she captured every part of her Dubai room on camera.

The video has since gone viral and gathered mixed reactions.

Reacting to the clip, Omokri expressed astonishment to see the preacher indulge in such activities.

He explained the ‘old Mummy GO” would have declared same a ‘worldly’ behaviour and a straight ticket to hellfire.

All the same, Reno encouraged the “hellfire” preacher to have a swell time in Dubai but should avoid hell while at it.

He wrote: “That Mommy GO video in Dubai where she was excited like a teenager vindicates what I said last year. Religion thrives in Nigeria because of suffering.

“When you relocate abroad, those things you fast and pray for now seem so elementary, and your mind is able to be free of the religious delusions that previously held you in bondage!

“Who would ever have believed that Mummy GO will be prancing around a hotel suite in a bathing robe and showing off, like a #BBNaija housemate?

“The old Mummy GO would have declared such ‘worldly’ behaviour as a ticket straight to hell.

“Enjoy Dubai Funmi but make sure you avoid hell.”