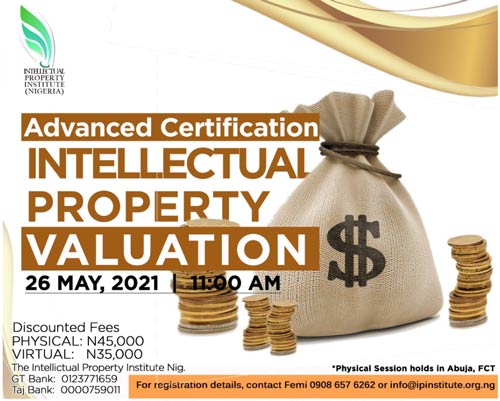 Why IP Valuation Training is a must-have.

In January 1952, the late Zulu entertainer Solomon Linda assigned the worldwide copyright in his song “Mbube” to Gallo Records for a mere 10 shillings. Solomon died in 1964.

Mbube was repackaged as Wimoweh/The Lion Sleeps Tonight and became a smash hit in the US and worldwide earning more than $15 million in composer royalties. It has been translated to French, Japanese, Spanish and several other languages remixed by more than 150 artists, and featured in at least 15 movies.

Today the Coca-Cola brand alone is worth approximately $84 billion. Facebook’s Intellectual Property is valued at more than $9 billion. ‘Dangote’ is the most valuable Nigerian brand.

WhatsApp and its IP assets were acquired by Facebook for $19 billion in 2014. Its current value is rumored to be a multiple of 100x.

The Instagram app is valued at more than $102 billion and Paystack was acquired in 2020 for an estimated $200 million.

In March, 2021, Digital artist Mike Winkelmann, known as Beeple, sold his digital artwork titled “Everydays: The First 5000 Days” for $69 million at an auction.

IP Valuation is the most critical skill in IP Management; it plays a key role in management and decision making including decisions to buy/sell, merge, collaborate or acquire IP assets. Intangible assets are reported to represent at least 70% of corporate value.

This Certification will give you an edge in industries that rely on intellectual property- Entertainment, ICT, Fintech, Pharmaceuticals, etc and other sectors that require the services of trained IP Professionals.