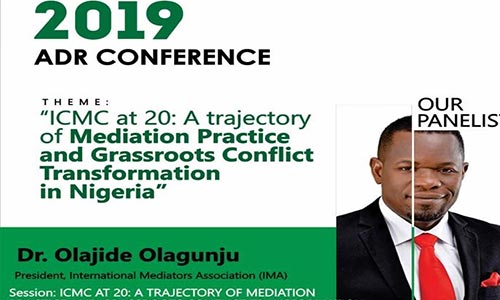 The 2019 ADR Conference, Induction & 20th Anniversary Dinner of the Institute of Chartered Mediators and Conciliators (ICMC) themed “ICMC at 20: A trajectory of Mediation Practice and Grassroots Conflict Transformation in Nigeria”, is scheduled to hold on the 3rd of December, 2019 in Abuja.

Dr. Olajide Olagunju, President of the International Mediators Association (IMA), will be speaking in the panel session on the theme.

Olajide Olagunju, an anthropologist, peace scholar, lawyer, mediator and arbitrator, was called to the Bar in December 1989. He pioneered the professional practice of mediation (Alternative Dispute Resolution (ADR) in Nigeria in 1995.

Olagunju studied Philosophy in Kinshasa, Law in Ife, Lagos and London, French in Kaduna and Kikwit, Peace Studies in Brandeis and Bradford and Anthropology in Brandeis and Selinus.

He has been a Special Adviser in Conflict Management, Labour and Law in the Nigerian Ministry of Power where his counsel facilitated the successful resolution of challenges to the privatization of the electric power sector in the country. He has practiced law for three decades and ADR for over two decades.

He established the ADR Studies Programme at Salem University in 2010 and won the Karpf Peace Price in 2006.

To register for the 2019 ADR Conference, kindly visit https://icmcng.org/portal