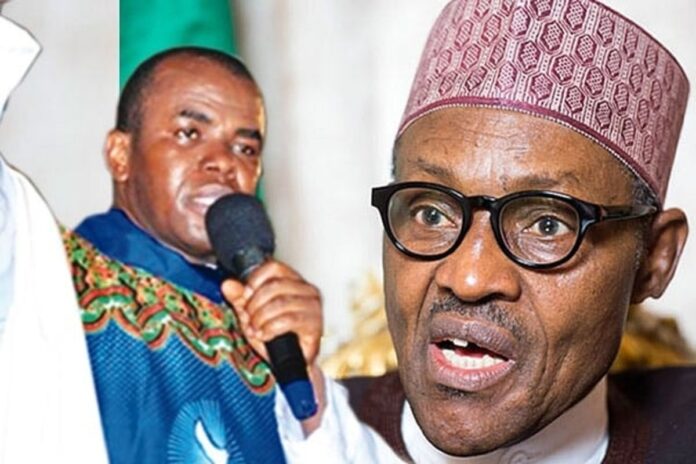 The comment accusing Mbaka of begging for contract is just a puerile emotional display from the handlers of the President. Every politically conscious person reserve the right to cheer and boo, Mbaka is no exception. But these ones keep reducing the office of the President and swinging into the mud at every provocation.

You do not stand with a sheep that is been led to the slaughter, when good conscience does not require that you do so. Buhari’s ship is a sinking one, it behoves on Mbaka to tell it to his face. Unknown to many, it is even more shameful to see this administration failing and still continue to drum support for it.

Many are condemning Mbaka, even his own colleagues not because they are sure the man is confuse, but because we already have a disgust for Buhari. Many didn’t even vote Buhari based on Mbaka’s sermons, but today they are claiming he deceived people. At this point, many are not been critical but sentimental.

Men in Mbaka’s position can easily be misunderstood and it is reasonable, but when Prophets talk, let’s decipher between their personal opinion and when they are delivering God’s message. They are chosen from among men, they did not become angelic because they are prophets, they reserve the right to also hold opinion, their opinions should not be mistaken for prophesy. He has called on Buhari to do the Honourable or be impeached, did he say God said Buhari will be impeached. Now hear him below:

“How can people be dying, the chief security officer of the country will be sitting down without making any comment,”

“Gunmen attacking people everywhere. Buhari should have resigned honorably following his failure as a leader. Let me tell you if it is in a civilized country, by now, President Buhari will resign with what is happening. So it is amazing that he has chosen to sit tight while people are dying anyhow.”

Many Kings in the Holy Books were made Kings, and even anointed to be one. If God did not approve they would not have been. In same vein, some failed in administration and God sent the likes of Prophet Jeremiah, Ezekiel, Isaiah et Al. Who told you that because Buhari is failing today, Mbaka’s prophesy about Buhari were false. Atleast were all others claimed Buhari will fail, he predicted success and it came to be.

They did not even accuse him of asking for contracts for himself, but that he brought contractors. Many who know priests and ministers of God will agree that at a point or the other, their followers or members can beg them to use their relationship to assist them. Through this kind of gestures, many secure admission, jobs, contracts and all kinds of favour from people whom the priests or ministers have their ears. So why are we shouting exactly? So we agree to the lines where the aide of Buhari claim this Buhari we have known and seen likes to follow due process and allow things happen the normal way? Or we just took nonsense erection from the mention of Mbaka and contracts? Pls let’s think again.

Let us learn to separate the dancer from the dance, let us call a spade a spade, never stick to a failing relationship when you see that the ship is coasting to hit the rock. It is only shameful that we have a government that despise criticism, but we cannot fault people for deciding to hold a different view from their previous. Spare Mbaka out of the insanity and puerile display of emotion by the clueless Garba and his likes who think they must respond to every jive.