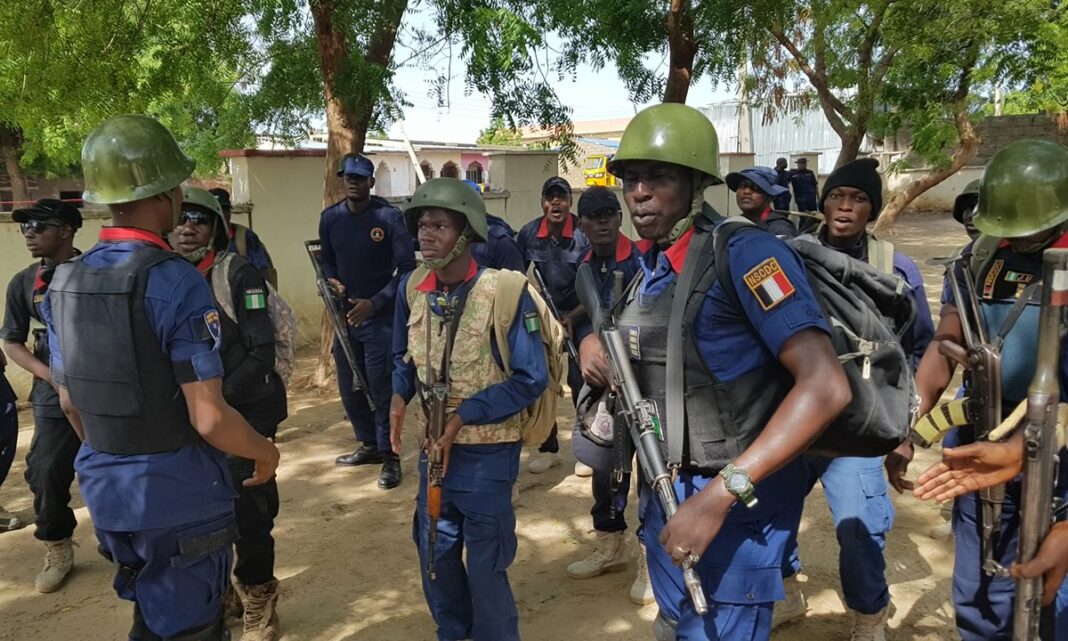 The Nigeria Security and Civil Defence Corps (NSCDC) in Abia State, on Wednesday, insisted that the state has recorded significant decline in the rate of farmers-herders clashes since the inauguration of the Agro-Rangers Unit of the command in September.

The State Commandant of the outfit, Mr Nnamdi Nwannukwu, said this while briefing newsmen in Umuahia on the achievements of the command since he assumed office in October last year, NAN reports.

Nwannukwu also said that the command had achieved a drastic reduction in bunkering, vandalism of petroleum pipelines, critical national assets and illegal dealings in petroleum products through the proactive and efficient performance of the Anti-Vandalism Unit.

He also expressed happiness that the Peace and Conflict Unit “has resolved a lot of cases that could have resulted in court cases or people taking the law into their hands.”

He further said that the Disaster Unit had been proactive in responding to disaster challenges, such as fire outbreaks, domestic and road accidents, among others.

The commandant also said that the Child Trafficking Unit had successfully curtailed the menace and domestic violence in collaboration with the Ministry of Women Affairs and National Agency for the Prohibition of Trafficking in Persons.

He further spoke on the manpower development initiative by the command, saying that at least 200 of its men had been trained on Basic Arms and Weapons Handling through “a historic home- grown approach and efficient collaboration with the Nigerian Army.”

Nwannukwu said that the command also engaged renowned training consultants to train its officers and men on fire prevention and control; disaster management; early signs and prevention as well as efficient and effective intelligence gathering and surveillance activities.

He also said that as part of the efforts to check the rampant cases of accidental discharge and killing of fellow officers and civilians, the command engaged training officers from the army, police and other sister security agencies to build more confidence in the corps operatives.

He said: “This positive collaboration with other sister-security agencies has helped in improving the performance index of our Intelligence and Investigations Department.

“Most of the intelligence and surveillance reports of our men have been used by sister security agencies to solve high profile cases of kidnapping and banditry, amongst other violent crimes.”

Nwannukwu said that his background as a lawyer helped the command to secure 19 convictions out of 24 prosecutions within the last one year.
He said that the remaining five were still pending in court.

He expressed joy that his efforts to revive the command’s Staff Cooperative Investment and Credit Society Limited, allegedly plagued by a litany of administrative, financial and other issues, were beginning to yield result.

He said that bold and commendable steps had been taken to recover contributors’ money, allegedly stashed away in private accounts, as well as recover and hand over to members, the plots of land paid for since 2013.

He said that efforts were also on to pay off the retirees and next-of-kins of deceased officers the money they contributed while in service.

Meanwhile, the command, which had operated in a rented apartment since its inception in 2004, has moved to its permanent site on Aba Road, upon the completion of ‘take off structures’, including a two-storey building and commandant’s office block.

Nwannukwu, who is the ninth state commandant, recalled the ugly experience the command faced operating in a rented apartment.

According to him, the situation exposed the command to security and administrative challenges, “especially in the areas of the command’s armoury and unconducive work environment.”

He said that his administration decided to explore all legitimate options available in the last one year to change the narrative by giving the permanent site the desired attention.

“To the glory of God, these efforts have resulted in the timely completion of a one-storey building at the site, which has accommodated many sensitive departments and units,” he said.

The commandant listed some of their challenges and appealed to stakeholders and government at all levels to assist the command with operational vehicles, modern security gadgets and construction of more office blocks to enhance their capacity to deliver on their mandate.