The Nigerian Law School has reviewed its grading system. The review details is contained in a circular signed by the DG Prof. Isah Hayatu SAN and sighted by Legaldeskng(LDN)The new grading system has abolished “conditional pass”. The new system departs from the old grade threshold which grades a 30-39 grade in one of the courses as “conditional pass” and removes the conditional pass grade and allows a pass for a student who passes four out of the five courses and scores at least 35% in the fifty provided that such student’s cumulative score is not below 200 marks.

The new grading system is as follows:

The cumulative score must not be below 200 marks

Second Class Lower Division – Not less than 50% in four (4) Courses and between 40& to 49% in the fifth course. The cumulative score not to be below 250 marks

Second Class Upper Division – Not less than 60% in four (4) Courses and between 40% to 59% in the fifth course. The Cumulative score is not below 300 marks

First Class Division –Not less than 70% in four (4) Courses and between 40% to 69% in the fifth Course provided the cumulative score is not less than 350 marks. 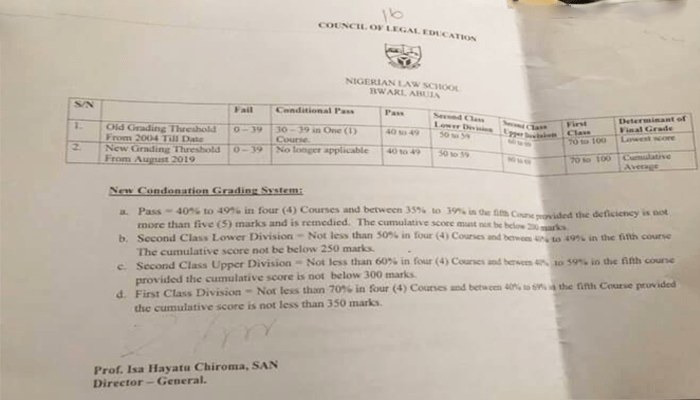 TNL recalls that the Council of Legal Education (CLE) announced at the Nigerian Bar Association Conference held in Lagos last year (2019) that it had “reviewed the grading system at the Nigerian Law School to the effect that the hitherto practice of assessing students at the Bar Examinations which was largely based on their least grades scored have now been revised accordingly.

“The effect of this review is that no students will be assessed by his/her least score any more,” it said.

However, despite the widespread excitement that greeted the Council’s announcement, the Council quietly returned to the old grading system and was evident in the results of the students that sat for the 2019 Bar Finals Examinations.