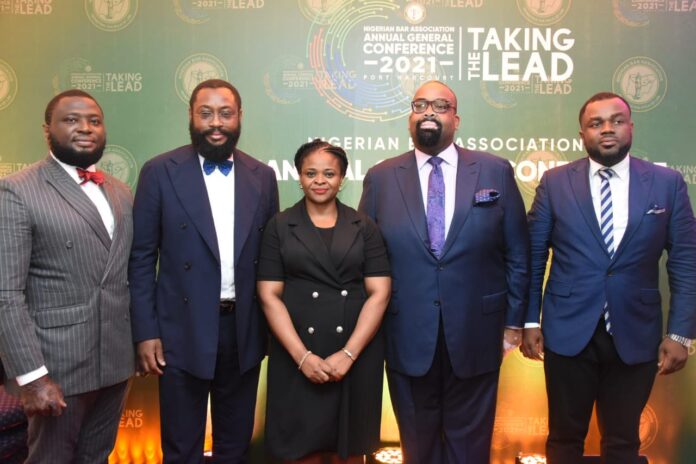 Nigerian Bar Association (NBA) President, Olumide Akpata says the body will continue to protect the interest of all citizens.

Akpata made the pledge as the 61st NBA Annual General Conference (AGC) opened in Port Harcourt, the Rivers State capital.

The one-week event – October 22 to 29 – is happening at the Yakubu Gowon Stadium. The theme is “Taking the Lead”.

Akpata announced that more than 10,000 legal practitioners registered to attend in person and virtually.

On government actions and policies, the NBA chief disclosed that the strategy is to further walk the talk.

“What we are doing now is more action, not TV, Radio and social media all the time. We have been commenting on issues since we came in but there is a need to do more than speak.

“The NBA issued a statement on the End SARS anniversary. We visited the Inspector General of Police (Usman Baba) to discuss areas that can be improved. We offered to train police officers in the Administration of Criminal Justice.

“The NBA sued the federal government on Twitter ban; we went to court to challenge the tenure extension for the former IGP (Mohammed Adamu); we sued the police over the sack of the pregnant officer in Ekiti.

“The NBA is decentralized for more engagement, it’s not all about the national leadership. We have sections on Public Interest and Development Law (SPIDEL), Business Law (SBL) and Legal Practice (SLP).

“We have more than 10 Fora; we have 125 branches across the country. These units are also at liberty to speak on issues affecting Nigerians. We will definitely continue to step into the space”, he promised.

Akpata assured that plans had been put in place for a seamless event, adding that about 300 lawyers volunteered to assist with logistics.

“There are adequate facilities at the venue and many pick-up points for materials. Lawyers with disabilities won’t face difficulties because we took them into consideration”, said the Templars senior partner.

Akin Ajibola, Chairman, Technical Committee on Conference Planning, confirmed that a virtual platform had been deployed for the broadcast of the convention in real-time.