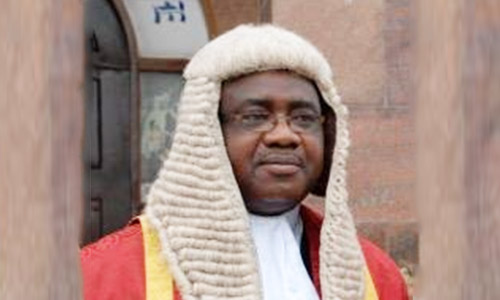 The Nigerian Bar Association Abuja Branch (Unity Bar) has held a magnificent Night of tributes in honor of its past Chairman, Hon. Justice Jude O. Okeke, FICMC at the Abuja Ecumenical Center.

The Chairman of the Branch, Ms Hauwa Shekarau opened her welcome address with a saying by Williams Shakespeare “Cowards die many deaths before their time, the valiant never taste their deaths but once, it seems to me that most men. It seems to me most strange that men should fear, seeing that death, a necessary end will come when it will come.”

She welcomes all in attendance and stated that it was a rude shock for many who had communicated with Late Hon. Justice Okeke a few days preceding his demise.

Ms Shekarau stated that the Late Hon. Justice Okeke was an outstanding gentleman and he loved all that cane into contact with him. She added that to the Unity Bar he was a trail blazer and a reference point having served without blemish as a bar man and on the bench. “He was indeed a worthy ambassador of the bar on the bench.”
She further stated that the night of tribute is the Branch’s way of appreciating God for his short life spent with them.

Ms Shekarau ended her address with a quote from Maya Angelou “A great soul serves everyone all the time, A great soul never dies but brings us together again and again.”

Finally she said “Hon justice Jude O. Okeke lives on in our hearts.”

Also in attendance was former General Secretary of the NBA Jonathan G. Taidi.