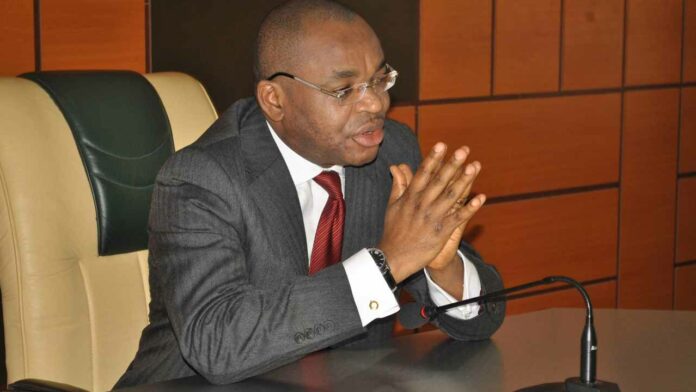 he newly crowned clan head of Oniong in Onna Local Government Area of Akwa Ibom State, Etebom Samuel Efik has condemned harmful traditional practices in the state among which was forcing a widow to marry one of the males from her late husband’s family.

The monarch who is also a lawyer said such practice is repugnant to the tradition and should not be practised in this modern generation.

Speaking during his coronation ceremony in Onna, the Royal Father also called on his people to rise to the realities of the time and not blame every misfortune on witchcraft.

According to him, “we have to kick against superstitious beliefs and some harmful traditional practices including, ‘the unsavoury practice of coercing widows to choose another member of the late husband’s family as her new spouse bespeaks the repugnancy of our traditional biases.’

“We need to educate our people that “it is not witchcraft that causes every misfortune that befalls us, such as sickness, joblessness or death, we need to open our minds to the fact that self-employment is often not only more beneficial but also very achievable for most of us.

“We also need to educate them to move away from some of the “anachronistic ways, beliefs and practices, some of which we have held onto as tradition and customs under the delusion that we have been doing the biddy of the gods or our ancestors.’’

He also encouraged Local Government Councils to expand their Internally Generated Revenue (IGR) base rather than depend solely on the monthly allocations from the Federal Government.

Efik said the council should make more efforts to generate revenue internally saying it would “greatly alleviate the economic and unemployment challenges prevalent in every Local Government in the country.”

He advised them to establish mechanised farming schemes in their areas to provide employment to the teeming unemployed youths.

“The idea of Local Governments having to depend solely on Federal Government monthly allocation is lamentable,’’ he said.

In his remarks, Governor Udom Emmanuel represented by the Commissioner of Works, Ephraim Inyangeyen gave assurance that the state government is committed to partnering with the royal fathers to ensure sustainable peace and development of the state.

“We hold the traditional rulers in the highest esteem, with their support contributions, peace and development will continue to reign in the local government areas of the state,’’ he said.

The governor who commended the people of the clan for the spirit of brotherhood described the new Clan Head as an accomplished professional and called on the people to support him to ensure that the clan will continue to be one of the leading clans in the local government.

The ceremony which attracted members of the political class, the business community, women and youths from all parts of the state was chaired by Edidem Ntuk Obom X11, the paramount ruler of Ikot Abasi local government area.