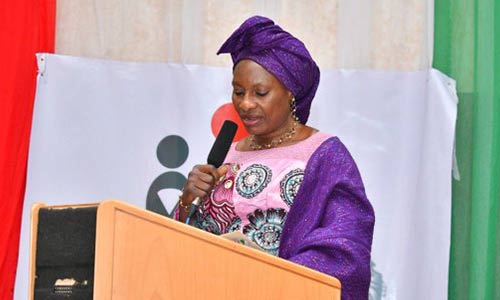 The Minister of Women Affairs, Dame Pauline Tallen; the President of National Council for Women Societies, NCWS, Hajia Lami Adamu Lau; the President of the National Association of Women Journalists, NAWOJ, Ladi Bala and other women groups on Tuesday threw their weights behind the legislative move to rename the National Centre for Women Development, (NCWD) after its founder and former First Lady, late Mrs Maryam Babangida.

The Centre was established in 1992 and named after the late First Lady as its initiator but changed to NCWD in 1994 during the military regime of the late General Sani Abacha.

The stakeholders spoke at a one-day public hearing on “The National Centre for Women Developmental Act CAP N15, LFN 2004 (Amendment) Bill, 2022 to enhance the functions of the Centre and rename the Centre after H.E. late Dr. Maryam Babangida and for related matters (SB. 1042)” organised by the Senate Committee on Women Affairs.

In her remarks at the event, the Chairman, Senate Committee on Women Affairs, Senator Betty Apiafi, said the Bill she sponsored seeks to amend the principal Act by renaming the Centre as the Dr. Maryam Babangida National Centre for Women Development.

She said the development was to appreciate late Babangida’s outstanding contributions to the upliftment of Nigerian women and national development.

The chairman added that the amendment also seeks to enhance the functions of the Centre by granting the council discretionary powers to award contracts where they were previously restricted among other things.

She said: “The need for the legislature to be at the forefront of the fight for women empowerment and development can never be overemphasized.

“It was an unfortunate event during the constitutional amendment passage that all five amendments bills that would have had a positive impact on women in Nigeria were not passed by the Senate.”

She, however, said the committee would collaborate with relevant stakeholders to fight for the progress of Nigerian women like Maryam Babangida did during her lifetime.

Minister of Women Affairs in her presentation said her ministry was in full support of renaming the Centre after the founder and making it the bank for all developmental issues.

On her part, one of the daughters of the late First Lady, Aisha Babangida noted that the original goal of the Centre included enhancing women’s role in education, culture, law, politics, agriculture, cooperatives and rural development.

Aisha, who is the Chairperson, Better Life Programme for African Rural Women said the Centre should be used to recognise and champion those women who are making a difference and setting an example to others.

“For instance, I would like to see a fund that can issue grants to women who are excelling in these areas to enable them to go further and to lead the way for others,” she said.

Others who spoke in favour of the bill include the former Leader of the House of Representatives, Hon. Mulikat Adeola Akande, ace broadcaster, Mrs. Moji Makanjuola, Hajia Bola Olagunju etc .

In her closing remarks, the committee chairman said since all views expressed were in support of the bill, the report for its consideration for third reading and possible passage would be presented to the Senate on November 15 after the resumption of the suspended plenary.