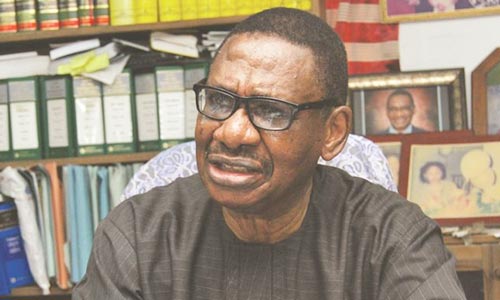 Prof. Itse Sagay (SAN), Chairman of the Presidential Advisory Committee Against Corruption (PACAC) has lambasted the Peoples Democratic Party (PDP) over its call for the prosecution of Ibrahim Magu, former Acting Chairman of the Economic and Financial Crimes Commission (EFCC).

The PDP and some civil society organisations have been equivocal in the demand for the prosecution of Magu who is currently being quizzed by the Presidential investigative panel chaired by a former president of the Court of Appeal, Justice Ayo Salami.

The PDP, in a statement at the weekend, had asked the Federal Government to begin the prosecution of Magu, saying his indictment has reinforced its position that the much-hyped war against corruption by the EFCC, under Magu’s watch, has been a huge scam by “corrupt individuals to cover the plundering of public resources, harass political opponents, intimidate and extort money from innocent Nigerians.”

However, speaking in a chat with Daily Independent on Sunday, Sagay who said Magu cannot be prosecuted until the outcome of the probe panel said the PDP is rejoicing because its tormentor Magu is out of office.

“The PDP is so happy that their tormentor is out of office. Magu is the one who has sent so many of them in prison; and many of them are in line to be prosecuted and sent to prison”.

“So, of course, they are rejoicing over what is happening to him. PDP is corruption fighting back. The second name for PDP is corruption. Why won’t they hate Magu after he has sent many of them to prison? So, by calling for his prosecution they are talking nonsense” he said.