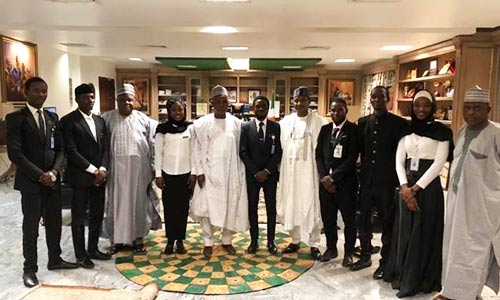 The Law Students Association of Nigeria (LAWSAN) is set to host the first North Regional Conference At Umaru Musa Yar’adua University (UMYU), Katsina from 25th to 29th of March, 2020.

The conference is said to be in line with the vision of the National President, Emmanuel Nwobodo, of taking Lawsan to the grassroots.

Emmanuel Nwobodo approved that regional conferences be held in the North, South East, South South and South West so as to promote and encourage unity

LegalDeskNg (LDN) gathered that the Local Organizing Committee under the Chairmanship of Bashir Muhammad Bello and Nafisat Abdullahi as the Committee Secretary, had meeting with the Honorable Commissioner of Justice and the Attorney General of Katsina State together with The Solicitor General, in person of Haj. Safiya (SAN) and The Director Public Prosecution on the 07th day of February, 2020, consequent upon which the meeting was rescheduled to 11th day of February, 2020 to be chaired by His Excellency, The Executive Governor of Katsina State, Rt. Hon. Aminu Bello Masari and his Deputy, in person of His Excellency, Mannir Yakubu after a comprehensive explanations on the importance of hosting the conference in Katsina state by My President.

His Excellency, the state governor, thereafter pledged to render all necessary assistance towards the facilitation of the North conference, in his remark also, The Deputy Governor expressed his happiness for having the mandate to host this grate august occasion, and finally the Attorney General assured the delegation of LAWSAN of readiness to release the necessary assistance as soon as possible and the high level of interest the government has for the program.