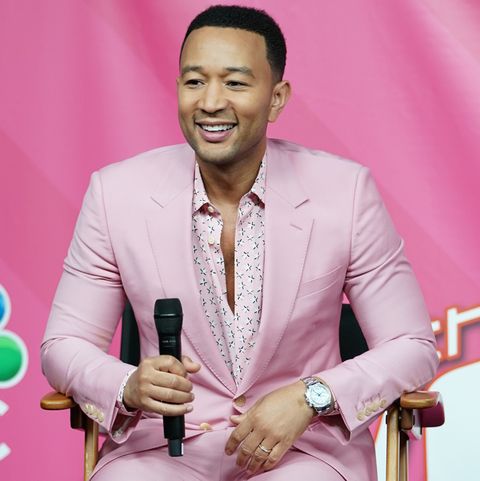 John Legend is a legendary artiste. In his 15-year musical career, he has won 10 Grammy, one Emmy, one Oscar and one Tony Awards, among several others.

By this feat, Legend is said to be one of the 15 people and the first black man to have won the Emmy, Grammy, Oscar, and Tony.

Born 40 years ago to a family of four children, Legend’s father was a factory worker while his mother was a seamstress. Legend’s musical career could probably be traced to his family background.

In the church they attended at Springfield, Ohio, United States, his father used to play drums in the choir, his mother sang and directed the choir while his grandmother played the piano.

At the age of four, Legend joined the church choir and three years later started playing the piano.

While studying English with an emphasis on African-American literature at the University of Pennsylvania, he was the president and musical director of a jazz and pop group called Counterparts.

In 2000, a year after he graduated from the university, Legend produced his first independent album and in 2001 produced another one which he sold at his shows. Later that year, he was signed to Kanye West’s GOOD Music label.

By 2004, Legend released an album, ‘Get Lifted,’ under West’s label, which got worldwide acclaim. The album topped most music charts, especially in America and Europe, and sold 850,000 copies worldwide.

In 2007, Legend received the Hal David Starlight Award from the Songwriters Hall of Fame, won the Academy Award for Best Original Song and Golden Globe Award in 2015 for co-writing the song ‘Glory’ from the film ‘Selma.’

In 2018, he portrayed Jesus Christ in the NBC adaptation of the Andrew Lloyd Webber/Tim Rice rock opera ‘Jesus Christ Superstar.’ He received a Primetime Emmy Award nomination for his acting role and won for his role as a producer of the show.

Legend has consistently criticised the US justice system, condemning abuses by the authorities and calling for an end to mass incarceration in the country.

The singer, who is a vocal critic of the President Donald Trump administration, in 2017 said it was a natural cause for him to direct his energy towards a campaign to end abuses and mass incarceration because it was an issue that affected him personally.

He said he had a number of family and friends who had been imprisoned, including his mother who was once jailed, adding that the greatest obstacle the US was facing when dealing with its criminal justice system was overcoming the fear of certain races and communities.

The musician, who launched the Free America campaign in 2014, said in an interview with The Independent UK, “wanting to end mass incarceration is not radical” and argued that the US’ current prison system is “radically terrible, radically out of step.”

Apart from campaigning against mass incarceration, Legend is now also through his Free America organisation working to make sure people with criminal backgrounds are given more employment opportunities in the US.

Last Thursday in Washington, DC, the soul singer announced the second set of participants in Unlocked Futures, a 14-month accelerator/entrepreneurship programme for people with criminal backgrounds.

With support from the Bank of America, Legend launched the philanthropic venture in 2017 to invest in the business ideas of ex-convicts.

Unable to secure employment, many formerly incarcerated people are said to be turning to entrepreneurship. However, they often lack the business skills, social networks and capital needed to launch a successful company.

With Legend’s non-profit, the ex-convicts are said to receive coaching on leadership skills such as board governance, fundraising, communications and talent strategy.

They also undergo an assessment that gauges areas for improvement and team up with mentors from a network of organisations, including the Bank of America, which has provided grants of $1m.

“If we want the full human potential that is contained in our communities to be maximised, we need to include formerly incarcerated people in conversations around hiring and how we develop the workforce,” Legend said. “These folks are valuable and they’re worth reintegrating into our society.”

Net worth and home

Legend is reportedly worth $45m (N16bn). He is married to supermodel Chrissy Teigen and both are said to be real estate mavens.

In January 2016 when Teigen was pregnant with their first child, the couple bought a $14m home once occupied by singer Rihanna.

The house has five bedrooms and eight bathrooms and is at the end of a cul-de-sac in Beverly Hills, a perfect family-friendly location.

The house sits on an acre of land and features a state-of-the-art theatre room, nine flatscreen TVs, a billiard and party room, and a professional gym.

There’s an oversized steam-sauna-shower, with an infinity soaking tub to take in the California sunsets. The home also has a closet room featuring marble detailing and shelves galore for shoes, a fireplace, office, two private balconies, and even an entertaining area for private lip sync battles. A sleek exterior features large expanses of glass that offer stunning views from the inside.

Legend and his wife reportedly drive some of the world’s luxurious cars, including a Range Rover Autobiography, Bentley Continental GT, Jeep Grand Cherokee and Cadillac Escalade.

However, the soul singer has frequently been seen riding the Tesla S, a five-passenger electric luxury sedan available in four variants: the base Model S, Extended Range, Performance and Performance with Ludicrous Mode.

The base Model S offers 310 miles of range and a 0-60 mph time of 4.1 seconds and comes standard with 19-inch wheels, all-season tyres, an adaptive air suspension, LED headlights, access to Tesla’s Supercharger network, a power liftgate, dual-zone automatic climate control, among others.

The social media feeds of Legend and his wife are often filled with documentation of their food exploits. They have both posted photos of both learning to make a Bloomin’ Onion (an appetiser), eating KFC in bed among others.

Last year when Legend got the Emmy Award and was seen night after gulping pancakes with his wife, GQ caught up with the singer to discuss his and his wife’s diet life.