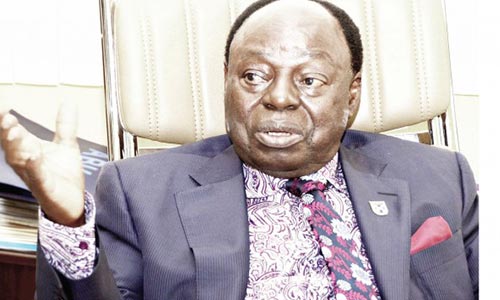 AT the current rate which the nation is spiraling, it is hard to conclude that Nigeria will remain intact till the end of the 21st century, i.e., another 80 years from now. This is very optimistic. Why do I say this? I grew up during the colonial days and our teachers in Emmanuel Primary School, Ado-Ekiti, the only educational institution I ever attended, taught us about the sanctity of life. To drive their point home, they taught us such poems as “Yi ese re si apa kan, ma se pa kokoro ni. Kokoro ti o ko nani, Olorun lo le da”, meaning “Don’t kill that insect which only God and no man can create”. If we were forbidden from killing a mere insect then, how come then that wanton killing on the farm, on the streets, in the classrooms and in hotel rooms has become the order of the day?

In the past, life was sacred. It was because life was sacred and there was security at home, on the farm, day and night that I was able to read all alone at night with a hurricane lamp in a classroom, in a windowless elementary school in the bush and obtained all my degrees from London University through private study. If life was like this, growing up, I simply would have been kidnapped and that would have been the end of the story. But today, the media is awash with news of murder, bank robberies, rape kidnapping of school children and destruction of farms.

When Nigeria’s founding fathers took into consideration our multi-cultural, multi-ethnic and multi-linguistic nature, they opted for a Federal constitution which worked very well for the overall development of the country. Under the parliamentary system of government and the regional arrangement, the Rule of law was the order of the day. There was safety of life and property. Indeed, there was no poverty in the land.

The situation of things today

The situation in Nigeria today is gruesome. There was a time the Naira was as strong as the Dollar. One pound sterling was equivalent to N1. It is now N500 to a dollar and N700 to a Pound Sterling and the end is not in sight! In 2020, Nigeria was ranked as the poorest country in the world with over 50 percent of Nigerians living in extreme poverty while over 7 million Nigerians are in urgent need of life-saving assistance (European Union Parliament Resolution, January 2020). Besides, “Nigeria was ranked the poverty capital of the world” (World Poverty Clock, June 25, 2018).

Some weeks ago, the Chandler Good Governance Index, CGGI, ranked Nigeria third worst country out of the 104 countries ranked in the world scoring 0.319 point ahead of Zimbabwe and Venezuela
The Global Terrorism Index, GTI, also reported that Nigeria, where 2,043 people died from terrorism-related acts in 2018 and 1,245 in 2019, retains its third position in world terrorism.

Invitation by the National Assembly to President Muhammadu Buhari

From all quarters, people have been clamouring for the convocation of a Constitutional Conference and a new people’s constitution. The President has consistently been misadvised on the need for a Constitutional Conference which will give birth to a new constitution. Due to the state of insecurity poverty and unemployment in the country, some groups of Nigerians have become increasingly frustrated and uncomfortable with life and are calling for secession. In the midst of it all, it was recently reported that the House of Representatives mooted for a declaration of a state of emergency.

Consequences of declaration of a state of emergency

Undoubtedly, the declaration of a state of emergency exits the Rule of Law and when a state of emergency is declared, the Rule of Law evaporates. Indeed, law ceases to work and lawyers in government will become instruments of oppression while practicing lawyers whom the masses can turn to are degraded to the status of fig leaves. Lawyers then become the tools that keep bad people in power and put the good ones in jail. Again, the elements of justice become obstacles to justice. Of course, under emergency laws, the weakest members of the society or the minorities are the first to suffer. Finally, a state of emergency will lead to unimaginable instability.

Root cause of Nigeria’s problems

The root cause of our problems is the 1966 coup by the military which suspended the 1960 and 1963 constitutions. The totality of what I am saying is that it was the January 15, 1966 coup that is the root cause of the problems afflicting the country today. When there is a health problem, the doctor diagnoses the ailment in order to ascertain the cause of the ailment for a proper treatment. The military compounded matters when it wanted to exit governance in 1999 by foisting on Nigerians the 1999 military constitution which it christened a people’s constitution instead of going back to the 1963 constitution which it suspended in 1966. During the period of military rule, they ruled by Decrees. Oil was discovered and we were told that our problem was not money but how to spend it. The Structural Adjustment Programme was introduced in the 1980’s and our Naira was devalued, further drifting the country.

The call for a new constitution

Restructuring and a new constitution are so important to turning things around in this country today to the extent that many leaders like General Ibrahim Badamosi Babangida (IBB), former Military Head of State, Alhaji Atiku Abubakar, Gen. T. Y. Danjuma, their Royal Highnesses, Chief Edwin Clark, Professor Ben Nwabueze, Professor Nwaokobia, numerous members of the Inner Bar, different organizations throughout the country are now echoing the tune of restructuring as a means of keeping the country together. The media is not left out. As a matter of fact, The Guardian, the Flagship of the Nigerian press, has published 26 Editorials titled Federalism is the Answer- Afterall

I agree with The Guardian and others who have been craving for a new constitution. There is no earthly reason why we cannot adopt the 1963 constitution and modify it in view of recent developments in the country. For example, instead of the four Regions we had during the First Republic, we can modify the constitution for them to become what we know as our six geopolitical zones today. In this way, a new constitution can be enacted within one year. This will enable us to have new leaders chosen under a new constitution instead of recycling failed leaders.