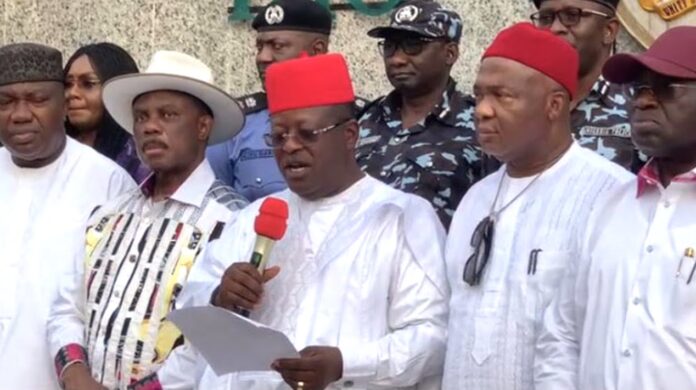 A group of experts, the Global Association of Concerned Imo Youth (GACIY) has called on Southeast governors and other Igbo leaders to protect education in the zone before the activities of the proscribed Indigenous People of Biafra, IPOB turns the zone into a whipping boy.

The group also urged the government in the zone to urgently take drastic steps to secure all schools across Imo State and the Southeast in order to restore the confidence of learners and teachers.

GACIY made this call in a release signed by the Convener, Sir Collins Ughalaa and made available to DAILY POST in Owerri, Imo State.

”Financial experts say these shutdowns have cost the SouthEast over N30b. But the long term impact has not been calculated. We call on Government to reclaim the public space and guarantee the security of persons who wish to go about their lawful business regardless of any sit-at-home order.”

GACIY encouraged traditional and religious leaders to condemn the assault on education and basic human rights particularly in Imo.

“We call on the IPOB and other aggrieved groups to step out of their echo chambers and smell the room. Frustration at these callous restrictions of people’s rights is fast mounting. Soon, the people will take their lives in their hands.”

“The gunmen, out to enforce a so-called sit-at-home order from the IPOB), struck while students were taking the English Language paper. We view this as an attack on the psyche of all learners in Igbo land as they now face their studies in trepidation unsure of what might follow.”

“A few weeks ago, gunmen burnt passengers alive for daring to travel on Monday. Trucks conveying merchandise have also met a similar fate at the hands of armed enforcers in different parts of the state just for moving on Monday.”

“The IPOB ‘decreed’ sit-at-home every Monday (from 9th August) in solidarity with their leader Nnamdi Kanu who is currently on trial. The ‘order’ was later revised to take effect only when Mr Kanu was to appear in court. His next court date is Oct 21, 2021.”

“Despite this, the IPOB ‘order’ has produced 8 unsolicited holidays in the South East between August 9 and Sept 14, 2021. Apparently, the arrowheads have lost touch with their foot soldiers. The falcon no longer hears the falconer.” GACIY avered.