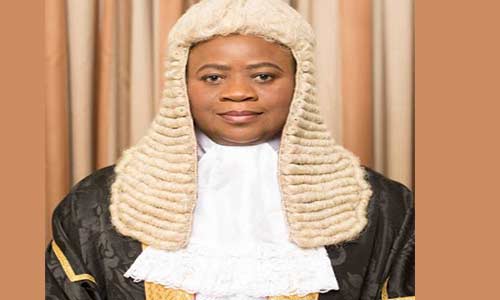 The President of the Court of Appeal, PCA, Justice Monica Dongban-Mensem has warned members of the election petition tribunals not to be used as weapons to truncate the election.

Justice Dongban-Mensem who gave the warning on Monday said the court will not hesitate to deal with anyone found wanting in an attempt to put the judiciary into disrepute.

While admonishing them to operate within the umbrella of their conscience and integrity in the discharge of their duties, Justice Dongban-Mensem warned: ” do not see it as an opportunity make money to enrich yourselves, but rather go there to build your name and your future as it is literally said that a good name is better than Silver and gold.

“Discharge your duties with utmost good faith not be carried away by little advances. Your integrity and that of tribunal and its members and in the public searchlight, you must therefore ensure you are used as weapons to truncate the process. The court will not hesitate to deal with anyone found wanting in this regard.”

Justice Dongban- Mensem explained that the training was clearly in anticipation of the general election coming up in a few weeks from today.

She noted that the theme of this workshop emerged from a pensive analysis of past experiences we seek to highlight the various challenges associated with the Tribunals and adequately brazen you up against them.

As you are well aware, elections play a very vital role in a democratic system of government as it gives the citizens the chance to choose their leaders.

The Registry is a very important organ of an Election Petition Tribunal and its administrative duties include the receipt of the Petition and other Court Processes for filing, Service of Court Processes timeously on Parties, issuance of Hearing Notices, preparation of Court Proceedings and Orders, custody and safekeeping of the Tribunals’ documents, compilation of records among various other duties and responsibilities.

The effectiveness, quality, efficiency, transparency and speed of the Registry has direct impact on the performance and justice delivery of the Election Tribunal.

It is equally important to remind you that you must constantly relate with the Election Petition Tribunal Unit at the Headquarters at intervals and report matters you are uncertain about to forestall breaches in communication. For the sake of emphasizes, it is important to state that Petitions before the Tribunals are time bound. It is therefore your utmost responsibility to ensure processes are properly and timely filed once they are brought to the Registry to forestall administrative injustice to the Parties before such matters are adjudicated.

You must count yourselves worthy to have been chosen to perform in this regard. Our choice is premised on trust, competence and confidence the Court has in you which I pray you do not erode while discharging your duties at the Tribunal.

Election like all facets of human endeavours witnesses its own shortcomings as the conduct of the election processes may come with one or two hitches and problems that subsequently affect outcomes of such a process.

The need to correct the problems encountered in the electoral process brought about the birth of the Election Tribunal which has been adequately provided for in the Constitution of the Federal Republic of Nigeria, 1999 (as amended) and the Electoral Act, 2022, (as amended). They are established for the purposes of determining disputes arising from the conduct of election of elections into the various elective positions.