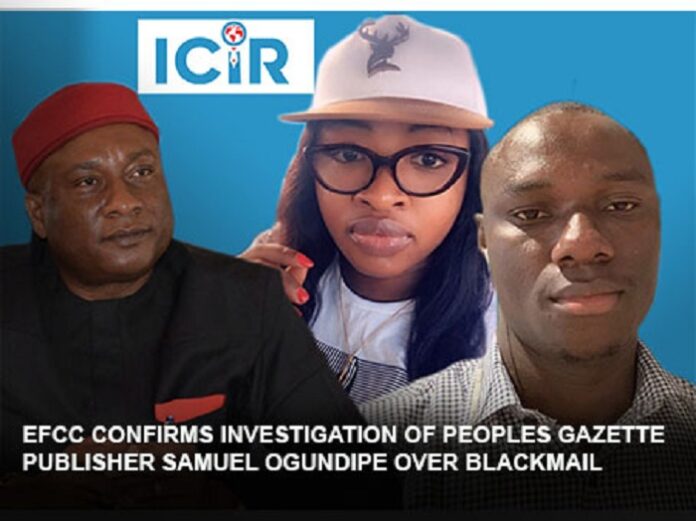 The Economic and Financial Crimes Commission, EFCC, has confirmed that it is investigating the publisher of a Nigerian online newspaper, Peoples Gazette, Samuel Ogundipe, for allegedly blackmailing the Air Peace airlines Chairman, Allen Onyema.

The ICIR also confirmed from the commission that the Peoples Gazette’s accountant, Oluwafisayo Fadesire, was detained in June by the agency’s operatives over allegations of extortion and blackmail.

An online newspaper, Newsdiary online, had first broken the news of Ogundipe’s alleged blackmail of the Air Peace boss last week, an accusation that the journalist denied to several media houses, including The ICIR.

Although the Chairman of the EFCC Abdulrasheed Bawa, would not speak on the matter when contacted during the week, insisting that it was not his style to conduct media trials, sources close to the investigation at the anti-graft agency’s Lagos office confirmed that Peoples Gazette’s accountant, identified as Oluwafisayo Fadesire, was arrested and detained while trying to represent her publisher, Ogundipe, at a meeting in Ikeja GRA office of the Air Peace Chairman.

She was at the meeting to receive the sum of $30,000 in cash, which she told investigators that Ogundipe had instructed her to collect.

Insider sources at the EFCC who spoke to our reporter in Lagos during the week said that the agency’s investigations showed that Ogundipe had obtained a document indicting Onyema of financial crime and had offered to trade the information for a sum of $300,000.

Prior to the saga, Peoples Gazette had secured a front-page banner advert from Air Peace.

The ICIR findings show that the advert was placed on the news website for several months before the relationship between Allen and Ogundipe turned sour.

Wayback Machine, a platform that archives web pages, revealed that the advert stopped running on the Peoples Gazette website in late June.

Onyema had been accused of some financial misappropriations in the past and Ogundipe reported the saga while working at the Premium Times as Breaking News Editor.

In 2019, the Air Peace Chairman was indicted in the United States for bank fraud and money laundering.

The Department of Justice U.S. Attorney’s Office, Northern District of Georgia, charged him with bank fraud and money laundering for moving more than $20 million from Nigeria through United States bank accounts in a scheme involving false documents based on the purchase of aeroplanes.

Although Onyema denied the allegation, The ICIR gathered that he was also allegedly involved in another shady deal, to which Ogundipe was privy. It was alleged that the journalist asked to be paid $300,000 to keep quiet about the scandal.

But unknown to Ogundipe, Onyema had reported the alleged blackmail to the Lagos EFCC on June 2. The EFCC then asked Onyema to play along and to tell Ogundipe to come over to the Air Peace office at GRA, Ikeja, to collect the first tranche of the money.