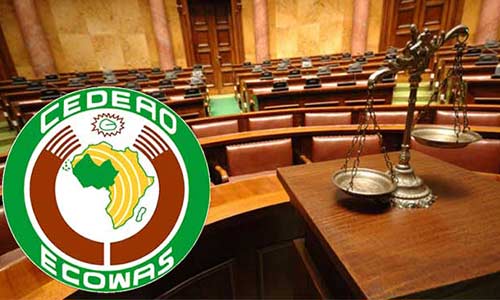 The ECOWAS Court of Justice on Wednesday, 29th September 2021 dismissed a suit filed by a former staff of an ECOWAS Institution seeking a supplementary judgment in order to accommodate some claims which were allegedly not captured in the earlier judgment of the Court of February 2020.

But in dismissing the suit on Wednesday, 29th September 2021, Justice Keikura Bangura, the judge rapporteur for the suit who read the judgment said that under Article 19 (3) of the 1991 Protocol of the Court states, “the Court shall give only one decision in respect of each dispute brought before it.”

It therefore upheld its judgment on the 3rd of February 2020 in where it dismissed all other claims brought by the Applicant Prof Adelegan after carefully considering the initiating application, documents before it and arguments of both parties.

Having delivered its earlier judgment which was conclusive and dealt with all the issues, the Court rejected the claims sought by Prof Adelegan and dismissed the case as lacking in substance.

Both parties were asked to bear their cost.

In the initiating application with suit no ECW/CCJ/APP/40/17/SUPP filed pursuant to Article 63 and 64 of the Rules of the Court, on 13th of February 2020 by lawyers to Prof Adelegan a former staff with ECOWAS Bank for Investment and Development (EBID), he alleged that the Court omitted to make pronouncements on certain of the claims filed in the earlier suit.

He had asked the Court to compel the Respondent EBID to reinstate him and pay him all his dues from the date of the unfair termination of his employment or to pay all his entitlements from date of termination of employment to point of retirement.

Relying on the earlier judgment that found that the termination of Prof Adelegan’s employment did not follow due process and citing various decided cases, lawyers to the plaintiff, Mr Femi Falana and Mrs Funmi Falana relied on Articles 63 and 64 of the Rules of the Court relating to delivery of supplementary judgment.

Among other reliefs sought were an order for the reinstatement of the plaintiff, the payment of arrears of his salaries as well as other allowances.

The plaintiff told the court that EBID stopped payment of his pension plan following the unfair termination thereby interrupting his pension for life policy as a staff.

The lawyers added that the 2 million Naira cost of legal fee awarded does not cover cost of travel, hotel and other expenses and that the 75,000 dollars awarded as damages was for the unfair termination of his employment was not adequate as the amount does not add up to his arrears of salaries.

On its part, EBID represented by lawyers – Mr P.I. Ikwueto and Mr B.C. Igwilo told the Court that Prof Adelegan was not asking for correction of clerical mistakes, errors in calculation and obvious slips as required by Article 63 of the Rules, but was seeking to obtain new judgment from the Court.

They added that the judgment of 3 February 2020 awarded 75,000 USD as damages for unfair termination and dismissed all other claims made by Prof Adelegan, asking him to return all properties of EBID in his possession.

They told the Court that based on the terms of employment, Prof Adelegan was not entitled to pension for life as alleged but rather payment of monetary damages in event of wrongful termination of appointment which the court has awarded.

On admissibility in relation to Article 63 of the Rules of the Court which states “…The Court may, of its own motion or on application by a party made within one month after delivery of a judgment, rectify clerical mistakes, errors in calculation and obvious slips in it”, the Court noted that Prof Adelegan had not pleaded any section for rectification as required in Article 63 of the Rules.

Consequently, the case was declared inadmissible under Article 63, but was admitted under Article 64 having fulfilled the requirement for application to be filed within a month from date of judgment and the court proceeded to examine the matter.

In its analysis on the alleged omission of pronouncement on claims relating to reinstatement of Prof Adelegan and payment of arrears of his salaries and allowances, the Court noted that its earlier judgment in which it awarded damages and dismissed all other claims was all-encompassing and dealt with all the issues conclusively.

Also on the panel were Justices Gberi-Be Ouattara (presiding) and Januaria Costa (member).

Chukwuma Soludo And The Challenge Of Managing Expectations

Setting an Agenda for the NBA National Justice Reform Summit.

A Polluted Verdict? Allegations Of Judicial Malpractice And The Milan Trial

Failure To Kill Inmates On Death Row Within 10 Years