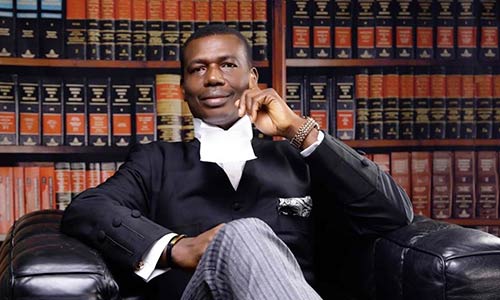 Last week, I presented a paper at the Webinar organized by Rule of Law and Development Foundation, which is a national discourse being promoted by the former President of the Nigerian Bar Association, Mr. Joseph Daudu, SAN. Permit me to share thoughts expressed with you, especially in the wake of Twitter suspension, media control and seeming intolerance to opposing views. No one ever thought that the suspension of Twitter would take this long, given the economic consequences of that decision, especially as it affects our youths. Whenever questions concerning the right to freedom of expression are raised, there are a lot of controversial arguments and more often than not subjective criticisms, trailing them. It is thus not surprising that in the wake of the renewed clampdown by the Federal Government on false, inciting and hateful speeches/publications, particularly via the internet/social media, the Nigerian polity is faced with warring views and reactions on the matter. We cannot deny the negative impact of fake news, inciting publications and unverified posts, to our national psyche. It is to find a balance between freedom of speech and expression and the protection of every individual and indeed the society, from defamatory and damaging publications.

Whilst many citizens, media practitioners and some right-activists have thrown their weight in support of the regulation of free speech and publications, notable warnings and vehement protests in opposition to the blanket rule/rein on free speech have continued to remain vocal by other stakeholders. Hence, from the recent ban on Twitter Incorporated by the President Muhammadu Buhari-led administration to the proposed Anti-Media Bills, the Criminalization of the Freedom of Expression has become a center stage of legal and political discourse in Nigeria. I therefore, along with other pro-democracy activists, join my other co-panelists to interrogate the extant topic at this 4th Annual Criminal Law Review Conference. Let us quickly delve into the meat of this matter.

THE CONCEPT OF FREEDOM OF EXPRESSION

The concept of freedom of expression is not unfamiliar in our jurisprudence. Freedom of expression is one of the fundamental rights which are universally recognized and protected. The 1999 Constitution of the Federal Republic of Nigeria (as amended) (1999 CFRN), particularly Section 39 thereof, has expressly provided for the protection of this right because of its importance and relevance to the enhancement of personal liberty and democracy. It states:

“(1) Every person shall be entitled to freedom of expression, including freedom to hold opinions and to receive and impart ideas and information without interference

(2) Without prejudice to the generality of subsection (1) of this section, every person shall be entitled to own, establish and operate any medium for the dissemination of information, ideas and opinions…”

Under Article IX of the African Charter on Human and Peoples’ Right (AFCHPR), it is guaranteed that:

“(1) Every individual shall have the right to receive information

(2) Every individual shall have the right to express and disseminate his opinion within the law.”

Going further, Article 19 of the Universal Declaration on Human Rights (UDHR) provides that:

“Everyone has the right to freedom of opinion and expression; this right includes freedom to hold opinion without interference and to seek, receive and impart information, and ideas through any media and regardless of frontiers.”

Finally, Article 19 of the International Covenant on Civil and Political Rights (ICCPR) provides for the right to freedom of expression as follows:

“1. Everyone shall have the right to hold opinions without interference.

2. Everyone shall have the right to freedom of expression; this right shall include freedom to seek, receive and impart information and ideas of all kinds, regardless of frontiers, either orally, in writing or print in the form of art or through any other medium of his choice.”

From the avalanche of the legal and constitutional backings on freedom of expression and the press, the importance and impact of this right cannot be overemphasized. What then is Freedom of Expression?

Freedom of Expression, as captured by several authors/jurists, connotes the liberty to openly discuss issues without fear of restriction or restraint’. It can be said that freedom of expression is basically that right inherent to every human to hold, articulate, share or disseminate their respective ideas, views and opinions without any fear of censorship. It is in furtherance of this right that one holds and expresses dissenting and unpopular views without fear of sanction. Hence, it is not out of place to hold that the right to freedom of expression extends to all other forms of rights (i.e right to life, liberty, thought and religion etc) through which one expresses, imparts or conveys his ideas, thoughts, opinions or information into concrete actions. Freedom of expression is held sacrosanct and inalienable, being attached to the existence of the individual or entity. So long as there is a right to life, then the freedom of expression must be guaranteed and protected.

It has now been held by judicial decisions (both local and foreign) that freedom of expression and the press constitutes one of the essential foundations of democratic society and the basic condition for its progress and development. In the case of Kauesa v. Minister of Home Affairs & Ors (2003) 3 CHR 234, the Supreme Court of Namibia held that free expression is necessary to the maintenance of a democratic state; that citizens must be free to speak, criticize and praise and that muted silence is not an ingredient of democracy because exchange of ideas is essential to the development of democracy. One can therefore safely assert that freedom of expression is of great importance to the human race wherein free exchange of ideas promotes harmony and societal development; whilst suppression of the freedom of expression often leads to conflict, instability and sometimes outright revolution. When a people become chained through their mouths, then tyranny beckons.

LIMITATIONS AGAINST FREEDOM OF EXPRESSION

Notwithstanding the vital role and value that freedom of expression plays in the stability of a democratic society, the aforesaid right, like most other rights, is limited and not absolute. Nonetheless, the Nigerian Constitution and all other International Instruments (to which she is a signatory) strictly provide for those circumstances where this extant right may be qualified, restricted and or derogated from. Under Section 39 (3) of the 1999 CFRN, freedom of expression may be restricted by a law that is reasonably justifiable in a democratic society for the purpose of preventing the disclosure of information received in confidence, maintaining the authority and independence of courts or regulating telephony, wireless broadcasting, television… Also, by virtue of Section 45 (1) of the 1999 Constitution, the right to freedom of expression could be curtailed by any law that is reasonably justifiable in a democratic society (i) in the interest of defence, public safety, public order, public morality or public health; or (ii) for the purpose of protecting the rights and freedom of other persons.

The foregoing constitutional limitation against this right has become the foundation and legal framework heralding several statutory weapons and arms against the exercise of free speech and expression in Nigeria. These statutory weapons include the offence of defamation, sedition, incitement to mutiny or disaffection among Armed Forces or the Police, incitement to commit any criminal or public disorder and blasphemy, to list a few. Every society has always developed protection for the reputation and dignity of its citizens. Thus, a person who alleges defamation through freedom of expression is always free to approach the courts in a civil suit to seek an apology and even damages, in appropriate cases. It can then be seen that freedom of expression is not absolute. We shall thus take out the time to promptly highlight some of these notable statutory limitations on the freedom of expression.

The sedition law in Nigeria dates back to the colonial period whereby the colonial government used the law of sedition as a cudgel against all forms of nationalist uprising. By virtue of sections 50 and 51 of the Criminal Code Act, it is a criminal offence to amongst others,

(a) bring into hatred or contempt or disaffection against the person of the President or of the Governor of a State or the Government of the Federation.
(b) excite the citizens of Nigeria to attempt to procure the alteration, otherwise than by lawful means, of any other matter in Nigeria as established by law
(c) raise discontent or disaffection amongst the citizens or other inhabitants of Nigeria.

Part of the alarming implications of the above law is that the government/prosecution need not prove all the aforesaid conditions in establishing the offence of sedition. Just any publication, speech or expression that brings disaffection against the person of the President is enough to justify the offence of sedition. More insidious is that truth is no defence to a charge of sedition. In the case of Queen v. Amalgamated Press of Nigeria Ltd (1962) WNLR 272, the court held that the real test of sedition is not the falsity or otherwise of the article but whether the publication is likely to expose the government to hatred, contempt or ridicule. Hence, a newspaper accusing the government of reckless corruption, unabated nepotism and abuse of office, even if true, can be held to be a seditious publication.

A respite to the draconian provisions of our sedition laws has however come on the heels of judicial activism vide the celebrated case of Nwankwo v. State (1983) 1 NCLR 366. There, the defendant was charged, convicted and sentenced to one year imprisonment for publishing a pamphlet titled “HOW JIM NWOBODO RULES ANAMBRA STATE”. In setting aside the conviction and sentence on appeal, the Court of Appeal in a historic decision, held that Sections 50 (2) and 51 of the Criminal Code Act were inconsistent with the provisions of Sections 36 and 41 of the 1979 Constitution (in pari materia with Sections 39 and 45 of the 1999 CFRN) and are by implication repealed from the 1st of October 1979.

Even though this cannot be a licence for defamation, the State should not criminalize offending publications given the consequences of such statutory prohibition on society. What it means is that state actors can get away with the deployment of the instrumentalities of state to gag citizens, subject them to arbitrary trials and in that wise, shut all avenues for dissent. Freedom of expression and the press is one of the basic components of any democratic society. We cannot hold ourselves in chains after many of our people have lost their lives and liberties to rid our land of military dictatorship. Every civilian government voted into power by the will of the people should allow the people to disagree whenever the need arises. We cannot go back to the dark ages.