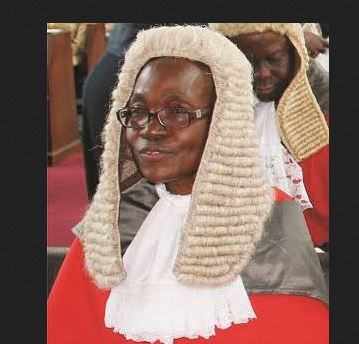 The Federal High Court, Abuja, on Friday, fixed April 23 for judgment in a suit filed by the Ondo State Chief Judge, Justice Oluwatoyin Akeredolu against the state governor and five others over a viral video made by a citizen of the state, Olupelumi Fagboyegun.

While the chief judge is the plaintiff, the Attorney General of the Federation (AGF), the National Judicial Council (NJC), Gov. Rotimi Akeredolu, the Ondo State Attorney General (AG), the state’s House of Assembly and the Inspector General of Police are 1st to 6th defendants respectively in the suit marked: FHC/ABJ/CS/2016/2021.

Justice Ekwo had, on March 22, fixed today, March 26, for the hearing of the suit after the court adjourned the matter to enable the AGF (1st defendant) and the National Judicial Council (2nd defendant), among others, to file their applications.

At the resumed hearing, only the AGF and the NJC were represented in court beside the plaintiff counsel.

Jibrin Okutepa, SAN, who represented the plaintiff, told the court that the matter was adjourned to hear the originating summons.

Counsel to the AGF, T. A. Uchegbu, in her argument, raised four preliminary objections, saying the suit was speculative and was not brought through proper procedure, among others.

On his part, Tunde Laaro, who represented the 2nd defendant, urged the court to strike out the name of the NJC as a respondent in the suit.

Laaro informed that a 10-paragraph affidavit had been filed to the effect.

However, Okutepa disagreed with counsel to the AGF and the NJC.

He said the argument by Uchegbu that the state government could investigate the embattled chief judge could not hold water.

The senior lawyer also argued that the applications filed by the 2nd defendant (NJC) were tantamount to an abuse of court process, saying “in paragraph 10 of their affidavit, the 2nd defendant cannot be held to say they have no cause of action. They know the suit will affect them.”

“The case deserves that your lordship answers the question in favour of the plaintiff so that law and order is restored in our polity to guard against whims and caprices of anyone.”

Justice Ekwo fixed April 23 for judgment in the matter.

NAN reports that since the case began, the 3rd, 4th, 5th and 6th defendants had not been represented in court.

Justice Ekwo had, on Feb. 25, restrained the governor and all the defendants from taking any further steps in relation to the alleged probe of the state’s Chief Judge, Justice Akeredolu, over the viral video alleged to have been made by Fagboyegun.

The judge gave the order in a ruling on an ex-parte application filed by Justice Akeredolu. Justice Ekwo particularly restrained the Governor, the AG and the House of Assembly from proceeding with the planned probe, and equally barred the AGF, NJC and the IGP from acting on any report submitted to them by the Ondo State government pending the determination of the main suit.

Fagboyegun, who claimed to be a stepbrother to the state’s chief judge, in the viral video, had alleged that Akeredolu instigated his detention for three years for going to their father’s house.