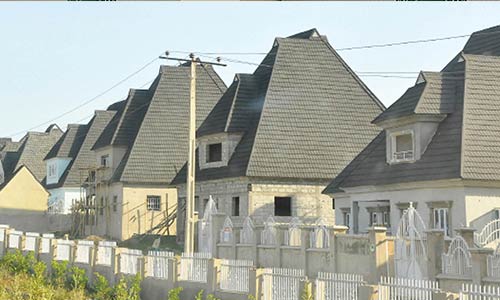 *The Association maintained their position that an independent neutral body should investigate the matter instead.

The Stonewater Royal Estate Landlord and Tenants Associations has raised an alarm over an alleged compromise of the investigation of murder of one Mr. Ifeanyi Olebala who allegedly died on the 22nd February, 2021.

This is contained in a statement made available to LegaldeskNG dated the 7th April, 2021 signed by Solicitor to the Association, Bartholomew Aguegbodo Esq.

The Association narrates that on the 22nd February, 2021 at “about 1am, one Mr. Charles who claimed that he works for Mr. Udoye Nwabike as a bulldozer driver drove a bulldozer within the estate towards a security building by the gate known as Stonewater Royal Estate, Abule-Ado, Satellite town, Lagos. His intent was to demolish a structure (security building) by the gate of the estate erected by the Stonewater Royal Estate Landlord and Tenants Association. There has been a prior contest over who owns the land.

“The security men at the gate upon noticing the approaching bulldozer accosted the driver and ordered him to stop. He refused on the basis that he has the instruction of his master to demolish the structure. The security men on duty had a heated verbal exchange with the said Mr. Charles. He thereafter called two other employees of Mr. Udoye Nwabike, one of whom is the deceased in issue to join him. The security men insisted that whatever would be done would be in the day time and not at that late hour. Noticing that they could not continue their plans, they left the bulldozer by the gate and left.

“At about 8am of the same day, some area boys with two armed mobile policemen came into the estate rounded up the security men found at the security house after shooting sporadically and sending other residents running for safety. The security men were taken to Tradefair Police Division and later transferred to Festac Police Division. On the 24th February, 2021 at the petition by Mr. Udoye, the matter was transferred to State CIID, Panti Street, Yaba for further investigation. While investigation was ongoing, Mr. Udoye Nwabike further petitioned the A.I.G Zone 2 Command headquarters alleging bias on the part of officers investigating the matter at Panti. It will be interesting to note that aside the Day the suspects were brought to State CIID that Mr. Udoye Nwabike never returned to clarify issues about his petition until the matter was transferred to Zonal Command Headquarters, Zone 2, Onikan.

“Upon the transfer of the matter to Zone 2, Onikan, it was assigned to Section D8 headed by SP Jamiu and his team which includes SP Sunday Nwaozor. They issued invitation letters to landlords in the estate and started calling the chairman with constant threats of arrest. At this point the estate chairman reminded the team that the estate was not aware of any physical confrontation or violence that resulted in death. The team without foundation concluded that the security men and landlords jointly killed the deceased. The team maintained through SP Sunday Nwaozor that they have conclusive proof.”

The Association said it lost confidence in section D8 team of the Zone 2 Headquarters and accordingly petitioned both the Inspector General of Police and his Deputy calling for constitution of a neutral body to investigate the matter.

They expressed concern that despite the approval of the petition, Zone 2 willfully refused to transfer the case file to Force CIID.

They also expressed concern that the issue of alibi raised by the detained suspect has not been investigated.

They said, “Not comfortable with the utterances of SP Sunday Nwaozor and his team, the estate association wrote a petition to the Deputy Inspector General of Police and Inspector General Police calling for a neutral body to conduct a discreet investigation into the murder of Mr. Ifeanyi Olebara and other related matters as they suspect a frame up due to the long drawn land tussle with Mr. Udoye Nwabike. The Deputy Inspector General of Police (investigation) approved the petition and sent a signal to the AIG Zone 2, Onikan, Lagos for the transfer of the case file to Force CIID, Annex for further investigation but the Zone 2 Command has willfully disregarded the directives to transfer the case. The estate association further petitioned the Inspector General Police and approval was given that the matter be transferred to the IGP Monitoring Team, Abuja. Officers from Abuja came for the case file but the AIG Zone 2 remained adamant that he was not going to comply with the signal.

“It must be noted that Mr. Osita Madubuike, Mr. Jeremiah Okafor, Emeka Ikegbunam (security men) engaged by the Estate Association has been in detention since the 23rd day of February, 2021 even when the their statement showed that they were not on the particular beat on the day of the incident. SP Sunday Nwaozor has maintained that until the security men at large are arrested that the three found on duty that morning would remain in police custody notwithstanding the provision of the constitution that they be taken to court within 48 hours in gross violation of their fundamental rights.

“The estate association has maintained that there was no physical violence from the account of the security men and the death of Mr. Ifeanyi Olebara has nothing to do with the security men or landlords of the estate. However, they have clamoured for an independent team to cause a discreet investigation to unravel the circumstances surrounding the death of Mr. Ifeanyi Olebara who they strongly believe has been used as a pun in the battle over the land tussle.

“On the 6th of April, 2021 (a date agreed by the team leader D8, SP Jamiu and the estate association chairman) about five landlords the chairman, Mr. Ifeanyi Okeke, the vice chairman Chief Chris Ogbogu, Mr. Godwin Ogbogu, Mr. Daniel Mgbachu and Mr. Onyeka Akabuike voluntarily honoured the Police invitation at Zon2 Command, Lagos. Statements were obtained from the landlords from 11am till about 5pm. Interview of the parties was scheduled same evening even though the petitioner was absent. Interestingly, the team leader SP Jamiu (a lawyer) called the suspect to state their case first in the absence of the petitioner who was represented by his lawyer, Mr. Richie Okwudili. The three earlier detained security men were called upon to state their case. The counsel representing the estate objected on the procedure stating that the petitioner should state his allegation before the suspects were called upon to respond. It must be noted that the petitioner was not present but was represented by a counsel, one Mr. Richie Okwudili. While the interview was still ongoing, the investigative officer, one Inspector Joy handed the detention order already prepared to SP Sunday Nwaozor who handed same to SP Jamiu. The entire interview was a charade as they already had a predetermined position. The statement of Mr. Charles (the bulldozer driver) stating that he saw 10 security men, Onyeka Akabuike, Daniel Mgbachu, and Godwin Ogbogu at well past midnight, could not stand cross examination by the estate association lawyer as the team leader SP Jamiu hurriedly retired him from the question session.

“It must be stated that the alibi raised by the detained suspect has not been investigated by the police at Zone 2 Command Headquarters. They are not interested in unraveling the mystery of Mr. Ifeanyi Olebara’s death. SP Sunday Nwazor received a call from Mr. Udoye Nwabike while statements were been obtained from suspects between the hours of 1pm – 2.30pm on the 6th April, 2021 wherein he assured Mr. Udoye that the estate landlords are with him making statements and everything was going on as discussed.”

The Association maintained their position that an independent neutral body should investigate the matter instead. They said justice is a three way traffic: justice for the victim, society and the suspect

“We restate our call to the police authorities and the general public that life is sacred and should not be used as a tool to achieve an end. We call on the public to impress it on the Inspector General of Police that Justice is a-three way traffic–justice for the victim, justice for the suspect and justice for the society at large. Let an unbiased team of investigators do a discreet job to unravel who the actual killer(s) of Mr. Ifeanyi Olebara is or are.

“The world is watching.”