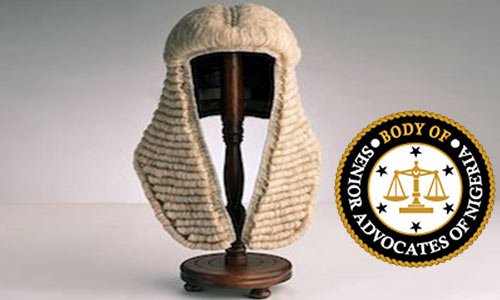 Body of Senior Advocates of Nigeria, (BOSAN) Monday called for restructuring of the system of appeals to the Supreme Court to reduce the work load of the apex court to a tolerable level.

Represented by Chief T. J Onomigbo Okpoko (SAN), the body spoke in Abuja at a valedictory session held in honour of Retired Justice Ejembi Eko from the Supreme Court bench.

The body noted with dismay that the nation’s cannot expect optimum performance from over worked Justices and added that, rights of appeal to the apex court, should be limited to decisions on the constitution and law alone.

The Attorney General of the Federation (AGF) and Minister of Justice, Abubakar Malami (SAN), on its part called on the judiciary to ensure accountability in it’s spending and to open it’s book for transparency.

He said, the federal government will support the judiciary in ensuring that all impediments to effective Justice delivery are removed and to also guarantee the independence of the judiciary as enshrined in the constitution.

In his own remarks, the Chief Justice of Nigeria (CJN), Justice Ibrahim Tanko Muhammad, said the valedictory session held in honor of Justice Eko was a celebration of, “quintessential judicial officer, who has not only excelled in his career but also in the development of the nation and humanity”.

While delivering his own speech, the retired Justice Ejembi Eko expressed worries over the stagnation in the salaries and allowances of judicial officers.

He has therefore called on the National Judicial Council (NJC), the Federal Judicial Service Commission (FJSC) and the Revenue Mobilisation Allocation and Fiscal Commission (RMAFC) to, “synergise and introspect and tell the world why the dereliction since 2007”.

Eko who bowed out of the nation’s judiciary, having attained the mandatory retirement age of 70 years on Monday reminded stakeholders present at the ceremony that the constitution provides that judicial officers of the superior courts of law shall be paid salaries and allowances as may be prescribed by the National Assembly, “but not exceeding the amount as shall have been determined by the Revenue Mobilisation Allocation and Fiscal Commission.

“By virtue of Section 6(3) and 5 and 84 of the constitution, their gratuities and pensions, being recurrent expenditure should be borne and payable to them by the NJC and not the state governments”, he said, even as he asked the NJC to direct Chief Judges to check the excesses of some state governors, who are not bordered on code of conduct for judicial officers and the constitutional provisions on separation of powers.

According to him, the NJC appears to be a toothless bull-dog in the appointment of Chief Judges of the state High Court, adding that, governors seem to think that the Chief Judge is part of their kitchen cabinet and that, their primordial consideration is underscored by the, “person I can work with.

“In most cases, they fear that if a certain judge is so appointed they should forget about their winning elections in the state, as if a Chief Judge is their Chief Thug”, he said and further explained that the NJC may be completely apolitical in recommending a Judge for appointment as a Chief Judge, but governors want to be purely political in accepting the recommendations.