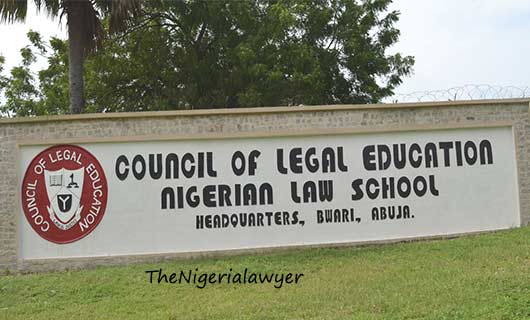 *Insisted It Complied With Public Procurement Act In Award Of Contracts
*Says More Documents Are Now Available For Audit
*Denies Non-payment Of Tax, Says Some Items Are On Tax Exemption List

The Council for Legal Education, the body that runs the Nigerian Law School, spent over N5 billion in violation of financial regulations in 2019, the latest audit report of the Office of the Auditor-General of the Federation (OAuGF) has revealed.

Over N3 billion should be recovered and remitted to the treasury by the director-general of the school, Isa Chiroma, who has been in office since 2018, including the period of the suspicious transactions in 2019, the audit report recommends.

It also demands explanations from Mr Chiroma, a Senior Advocate of Nigeria, for sundry transactions.

President Muhammadu Buhari has re-appointed Mr Chiroma for another tenure of four years effective from January 10, 2022.

Highlights of the issues raised concerning the transactions totalling about N5 billion include misapplication, diversion, waste, and misappropriation of public funds, non-remittance of taxes, and payment of contractors without supporting documents or for jobs not executed.

Some of the transactions were payments for unapproved foreign trips to London and some African countries by officials of the Nigerian Law School, the report added.

It cited an instance of an improper untilisation of N2.4 billion brought forward as the closing balance of 2018.

“The sum of N2,408,708, 784. 92 was the closing balance of 2018, which was brought forward to 2019 as opening balance, and the unspent balance was utilised contrary to extant regulations,” the report said, also revealing how the law school broke the financial regulations.

Other infractions enumerated in the report include unauthorised investment of donations, circumvention of procurement procedures, unauthorised payment of non-regular allowances, contract award and payment without tax deductions, and payments made without relevant documents.

For instance, the law school paid 32 contractors over N182 million without receipts and other relevant documents in 2019, the audit report says.

“The above payments were made without attaching relevant documents such as payment receipts, invoices, quotations, certificate of job completion and bidding documents to the payment vouchers to justify efficient of funds.”

Attributing the “anomalies” to weaknesses in the internal control system at the Law School headquartered at Bwari in Abuja, the audit report added that the payments might have been for “jobs not executed, loss or diversion of public funds.”

The report also spotlighted 65 payments totalling N891.4 million “made to contractors for supplies and renovations” without the advertisement of the contracts and evidence of bidding exercise.

It said “no bid documents or other relevant information attached to the vouchers to ascertain that there was open competitiveness and fairness in its awards and selection of the contractors as enshrined in the Procurement Act of 2007”.

The report also raised the issue of a questionable payment of about N140.9 million for various expenditures.

It said “N140, 864, 834.76 in 2019 for various expenditures as shown in the cash book through forty payment vouchers,” but “none of the payment vouchers was presented for examination thus making it difficult for auditors to validate payments.”

Of the over N1.55 billion realised as internally generated revenue (IGR) for 2019, the report said, about N387.9 million estimated to be about 25 per cent of the amount realised was expected to be remitted to the consolidated revenue fund.

But the law school only remitted N25.2 million, leaving unremitted balance of N362.7million, which the report categorised as either “loss of government revenue or diversion of public funds.”

Furthermore, the audit report observed that over N72 million was paid to contractors for the supply of diesel.

Another area of reported infraction was the payment of N188.8 million to various staff members as allowances in 2019.

“The sitting allowance was paid for holding day-to-day committee meetings for which the officers received salaries, and approvals for these allowances were not obtained from the National Salaries, Incomes and Wages Commission,” the report revealed.

It also unearthed N67 million the law school “invested in a commercial bank via a fixed deposit instruction”.

“Relevant documentary evidence such as certificate of investment showing interest rate and tenure was not presented for examination,” the report said.

It added that neither the approval of President Muhammadu Buhari nor the Accountant General of the Federation was sought to “operate the account with a commercial bank outside of the treasury single account (TSA).”

Also, “store items totalling N83, 128, 499. 97, procured through ten payment vouchers were not taken on store ledger charge, and there were no store receipts vouchers and store issue vouchers found in the store or attached to the payment vouchers made in respect of the supply.”

Meanwhile, the law school denined all the alleged infractions.

It denied the misapplication the N2.4 billion balance said to have ben brought forward from the preceding year.

“The Nigerian Law School year usually commences around October/November period and the bulk of school fees which makes up most of the internally generated revenue is collected around that period which is just before the closure of federal government financial year of 31 December.

“It is not practicable to spend collection of one year within two months and continue afloat for the whole year,” the report quoted the law school as saying in its response to a query.

On circumvention of procurement procedures, the school management explained that “some of these cash advances related to the procurement of some not-the-shelve items and the vendors prefer cash than going through the rigours of contract award.”

It also insisted it complied with the provisions of Public Procurement Act 2007, including advertisement for projects included in 2019 Appropriation Act were observed in the award and execution of the contracts.

The law school said the contracts were successfully executed in accordance with the guidelines stated in the award letter.

It added that the various minutes and documentations of Council of Legal Education Tenders Board which the audit report said were not provided “are now available for audit inspection”.

It also denied non-payment of tax and withholding tax, saying the list of items of expenditure (diesel and gas) are on tax exemption lists.

“The sum of N413, 000 charged or deducted as withholding tax has been remitted.

The school further argued that it did not break any law pertaining to procurement procedures.

Despite the school’s denials, the audit report recommended the recovery of some funds and justitfication of other sundry transactions.

It specifically asked the Director-General of the Nigerian Law School to “remit the sum of N2,408,708, 784. 92 to the treasury, and “forward evidence of remittance to the Public Accounts Committee of the National Assembly.”

He was equally requested to “apply sanctions relating to irregular payment and gross misconduct specified in the financial regulations.”

The report asked Mr Chiroma to recover and remit to the treasury the N891,367,842.31 said to have been paid to 65 contractors in breach of procuremnt law.

He is also to “forward evidence of remittance to the Public Accounts Committees of the National Assembly.”

The report also asked the law school boss to, “furnish reasons for making investment in commercial bank without complying with extant regulations on such investment.

The Director-General was also requested to justify the granting of non-personal advances above the threshold of N200,000.

“Recover and remit the sum of N9.8 million to the treasury,” the report said, among other recommendations.