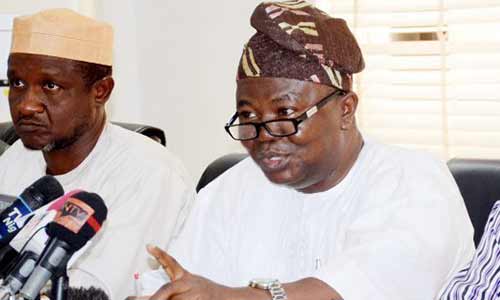 The Academic Staff Union of Universities (ASUU) has condemned what it tagged “hasty generalisation, blanket condemnation, and ridiculing” of the country’s academia by a funding agency.

ASUU was reacting to an allegation by the director of research and development at the Tertiary Education Trust Fund (TETFund), Salihu Bakari, that some lecturers in the country spend scholarships and grants to purchase houses and cars.

The director has also said he did not mean to disparage Nigerian scholars, saying he only referred “to instances of a few cases of diversion of grants by some beneficiaries of the agency’s scholarships and support”.

He said, as a mentee of very “many quality, honest and sincere scholars and researchers in the country, he can never bite the fingers that fed him.”

Recall PREMIUM TIMES report on Tuesday titled; “Nigerian Scholars spend research grants on cars, houses” exclusively reported the director’s response to a question by one of the participants at a research conference organised by the agency in Dubai, United Arab Emirates, on why conditions attached to accessing grants by TETfund are ‘too stringent’.

‘We will not take it’- ASUU

In a telephone interview with our reporter, the National President of ASUU, Biodun Ogunyemi, said his union would not allow his members to be disparaged by any individual or institution before a global audience.

Mr Ogunyemi, a professor, said any attack on Nigerian lecturers by anyone would not go unchallenged.

He challenged the accuser to provide evidences of such claims and that his union would be ready “to join forces at exposing the rot in the system”.

He said; “We reject this hasty generalisation in its totality and we will fight it to the end. ASUU will react appropriately very soon but I can assure you that this will never go unchallenged.

“This kind of statement ridicules our members on the global scene and we cannot fold our arms when institutions or individuals bring us to disrepute. There are many of us who are managing many grants from global institutions and the results of their efforts have been wonderful and respected globally. What kind of image are we now creating? This is unacceptable and ASUU will not take it.”

Mr Ogunyemi said he would not deny the fact that “just like any other institution, there are the good, the bad and the ugly among the lecturers”, but that “the bad has never, and can never outnumber the good.”

“Academic institutions do not exist in a vacuum. They are extensions of the larger society, so it is not incorrect to say there are bad eggs, but that you categorise everyone to be bad is what we will never take. When our products move to the global scene, they excel and outshine their counterparts coming from backgrounds where teaching and learning environments are conducive. So if we are not doing well, would they have been doing well too?”

Mr Ogunyemi said his union was part of TETFund assessment processes conducted round the institutions, and that if the agency had discovered such large-scale fraud as claimed by the director, it should have brought it to its notice and not disparage “the whole people in such an embarrassing manner”.

“We are committed to sanitising not just the university system but the entire country, and we are not unaware of the general rot. But everyone knows that out of 100 individuals, if five are bad, you cannot claim the whole 100 are bad. There must be clarity and contexts to every claim. ASUU will definitely respond to this because this news has gone viral, and it must be corrected,” he further said.

Corroborating the union leader was the former National President of the union, Sule Kano, who urged journalists to always prioritise the economic benefits their reports could attract and the likely consequences of ‘damaging reports’.

Mr Kano, a professor, who is also a participant at the ongoing research conference in Dubai, during an informal interaction with our reporter on the matter, said as a witness to the director’s ‘innocuous’ response to a question directed at him on the conditions attached to TETFund grant, he quite understands the ‘misinterpretation’ of his good intention.

Mr Kano alleged a grand plan to disintegrate the vocal lecturers’ union by those he described as the global capitalists and imperialists, and advised the media not to join in such a ‘dangerous exploits’.

In his response to the barrage of attacks he has received from some of the lecturers on his statement, the director, Mr Bakari, said he would “never disparage an institution he belongs to”.

Mr Bakari, PhD holder, said he was only reacting to a question from one of the participants on why there are new ‘stringent’ conditions attached to the agency’s various grants, and “why 100 per cent of the grants cannot be released to researchers”.

According to him, the few instances he raised, could not amount to generalisation. He said he must have been quoted “out of context”.

He said; “How can I disparage the same constituency I belong to? Does it not amount to me shooting myself in the leg? I must apologise to the lecturers and the union for being quoted out of context.

“It was my response to a question during a panel session and I had only cited instances of some individuals who received scholarships but refuse to go for studies. Some even abscond. And this is not abnormal in a system where you have tens of thousands of individuals. Sanitising our system requires collaborations and the best collaboration can only come from ASUU as a body. So I apologise for the misrepresentation.”

Mr Bakari added that the agency’s senior members “have many times been invited by anti-graft agencies to testify in cases of corrupt practices that may involve the agency’s beneficiaries, and that on many occasions, TETFund staff would have to fill forms as both witnesses and accused.”

“Each time such a situation occurs, we would have to be bailed like a criminal, and this cannot be in our best interest and in the interest of our nation,” he added.